A story that will leave you smiling: "Child of Mine" by David & Beverly Lewis 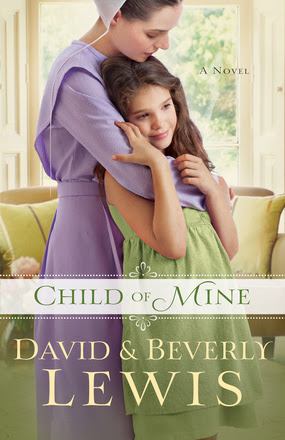 Flight instructor Jack Livingston has been raising his eight-year-old adopted niece, Natalie, since the accident that took her parents' lives. When he travels, Natalie is tenderly cared for by her Amish nanny, Laura Mast, who loves the little girl as her own.

Eight excruciating years ago, Kelly Maines's baby was kidnapped. Determined to find her child, Kelly has tirelessly pursued every lead to its bitter end. And now, with the clock ticking, one last clue from a private investigator ignites a tiny flame of hope: Just a few miles away lives a young girl who matches the profile.

Can this be, at long last, Kelly's beloved daughter?

Combining their efforts for a solidly entertaining read, husband and wife David and Beverly Lewis offer up an intriguing story in their latest book "Child of Mine". What would you do if your baby daughter was kidnapped? How long would you search before you gave up, if you did at all? Would you ever be able to move on? The authors have tackled this difficult "what if" scenario through the eyes of character Kelly Maine, and have done a wonderful job at dealing with something so heartbreaking while still having many light-hearted moments in the book. Kelly's story blends nicely with that of Jack Livingston and his niece, Natalie, and I enjoyed watching Jack and Kelly's relationship develop, along with Jack's relationship with nanny Laura as well. There were many unexpected twists and turns in this story where you are left pondering who is Kelly's long-lost daughter or who Jack will end up with. These mysterious elements kept the story moving along nicely, because I will say that I felt the book to be a bit detailed in some areas, to the point that the overall story did slow down. In fact, I would just be feeling tempted to skim ahead when another twist would show up, engaging me once again, and for this I commend the authors. I felt that the authors realistically portrayed Kelly's situation and I liked how they ended up resolving it, without a perfectly happy ending but rather one that reflects real life.

Those readers who have enjoyed previous books from these authors will find much to appreciate in "Child of Mine". I was left with a smile on my face, and I'm sure you will too! 3 out of 5 stars.
Book has been provided courtesy of Baker Publishing Group and Graf-Martin Communications, Inc. Available at your favourite bookseller from Bethany House, a division of Baker Publishing Group.

David Lewis is the bestselling author of Coming Home, his first solo novel, as well as a keyboard artist and pilot. He is the first editor for his wife, Beverly Lewis, as well as research partner and manager. David was born in Minnesota, grew up in the Midwest, and met Beverly in Colorado, where they currently make their home.

Beverly Lewis, born in the heart of Pennsylvania Dutch country, is the New York Times bestselling author of more than ninety books. Her stories have been published in eleven languages worldwide. A keen interest in her mother's Plain heritage has inspired Beverly to write many Amish-related novels, beginning with The Shunning, which has sold more than one million copies and was recently made into an Original Hallmark Channel movie. In 2007The Brethren was honored with a Christy Award. She has been interviewed by both national and international media, including Time magazine, the Associated Press, and the BBC. Beverly lives with her husband, David, in Colorado. Visit her website at www.beverlylewis.com for more information.