Action-packed, and sure to leave a smile on your face: "Full Steam Ahead" by Karen Witemeyer 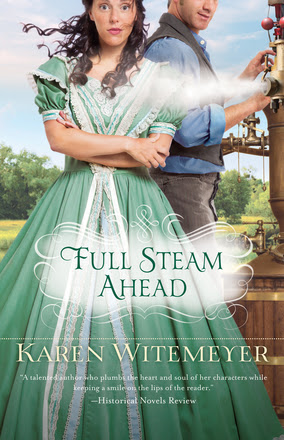 When love simmers between a reclusive scientist and a wealthy debutante, will they abandon ship or is it full steam ahead?
Nicole Renard returns home to Galveston, Texas, to find her father deathly ill. Though she loves him, Nicole's father has always focused on what she's not. Not male. Not married. Not able to run Renard Shipping.
Vowing to find a suitable husband to give her father the heir he desires before it's too late, Nicole sets out with the Renard family's greatest treasure as her dowry: the highly coveted Lafitte Dagger. But her father's rivals come after the dagger, forcing a change in Nicole's plans.
After a boiler explosion aboard the Louisiana nearly took his life, Darius Thornton has been a man obsessed. He will do anything to stop even one more steamship disaster. Even if it means letting a female secretary into his secluded world.
Nicole is determined not to let her odd employer scare her off with his explosive experiments, yet when respect and mutual attraction grow between them, a new fear arises. How can she acquire an heir for her father when her heart belongs to another? And when her father's rivals discover her hiding place, will she have to choose between that love and her family's legacy?

With non-stop drama, captivating characters, and romance galore, "Full Steam Ahead" is sure to please long-time fans of Karen Witemeyer while garnering her a host of new followers as well. The plot is a rather intriguing one, from the obsessed Darius seeking to stop any more deaths due to exploding boilers on steamships, to Nicole seeking to please her father by finding a suitable husband while protecting the family treasure. Nicole is unlike any heroine you have met before, and there were many moments that had me smiling (especially the scene with the snake!). Just when you think you have her figured out, she reveals another side to herself, and I especially enjoyed the scene between Nicole and Darius where she encourages him to forgive himself and allow God back into his life. Witemeyer handles the issue of faith very well, not coming across as pushy and yet making it a vital part of her character's lives. Readers will be encouraged to consider how they handle tragedies in their own lives, all while being entertained by Nicole and Darius antics. Those readers who love a good historical setting will appreciate the focus on steamships and boiler safety in the 1800's, and I love that Nicole is clearly a clever lass who can hold her own in the area of math and science. Now, are there some sections of the book where you will find it necessary to suspend your belief about the reality of such a scene occurring? Yes, perhaps, but you will do so gladly, happy to escape reality in order to spend some time with Darius and Nicole. And my wife assures me that the romance in "Full Steam Ahead" will leave the ladies smiling, so I encourage you to pick up a copy for yourselves!


Two-time RITA finalist and winner of the coveted HOLT Medallion and ACFW Carol Award, CBA bestselling author Karen Witemeyer writes historical romance because she believes that the world needs more happily-ever-afters. She is an avid cross-stitcher, shower singer, and bakes a mean apple cobbler. Karen makes her home in Abilene, Texas, with her husband and three children. Learn more about Karen and her books at www.karenwitemeyer.com..