Check out my review of "Susie's Hope"

be sure to enter the giveaway at the end! 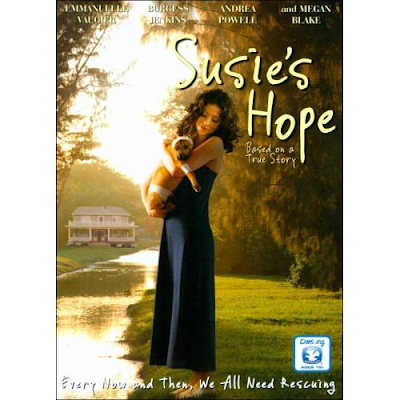 Based on the true story that successfully passed Susie’s Law in North Carolina, which seeks stricter punishment for animal abusers, Susie’s Hope brings to life the inspirational relationship between pit bull attack survivor Donna Lawrence and Susie, a pit bull-mix puppy found beaten, burned and left for dead. Recognizing reflect and abuse were to blame for the tragic attack that nearly claimed her life 10 months earlier, Donna resumes the battered animal and accepts her as family. Together, they learn to heal, love and forgive as they lead a historic effort to seek justice and protection, not only for Susie, but all animals. Starring Emmanuelle Vaguer (40 Days and 40 Nights), Burgess Jenkins (Remember The Titans) and Andrea Powell (Ender’s Game, The Twighlight: Breaking Dawn Saga: Part 2), Susie’s Hope is an incredible story of love, loss and redemption.

Anytime I see a movie advertised as being based on a true story, I'm instantly interested in giving it a go. And boy, am I glad that I sat down to watch "Susie's Hope", a story that had me wanting to close my eyes in places as the movie played across the screen! I think many of us have had moments in our childhoods where we had an awful moment involving an animal, and the scene where Donna is attacked by a pitbull was difficult for me to watch as I imagined myself being in her place. And yet that made the story all the more poignant as Donna moves towards a place of healing and forgiveness. Not only that, but she finds the courage to then pour herself into caring for a poor pitbull puppy, and also face down the injustice of the unbelievable cruelty that the dog suffered. Now, don't come into this movie expecting big Hollywood razzle dazzle. Yet I thought the acting was well-done, the movie flowed along at a good clip, and I was absolutely inspired by Donna's life and what she went through. I think anyone who watches this film, regardless of their own spiritual journey, will be amazed at how she find's purpose in her experience, how she realizes God saved her life for a reason, to change the world around her. Truly, this is one remarkable story!

"Susie's Hope" brings to life the importance of the issue of animal cruelty, set in a gripping story that will leave you thinking long after the closing credits. I award this movie a rating of 4 out of 5 stars.

"Disclosure (in accordance with the FTC’s 16 CFR, Part 255: “Guides Concerning the Use of Endorsements and Testimonials in Advertising”): Many thanks to Propeller Consulting, LLC for providing this prize for the giveaway. Choice of winners and opinions are 100% my own and NOT influenced by monetary compensation. I did receive a sample of the product in exchange for this review and post.
Only one entrant per mailing address, per giveaway. If you have won the same prize on another blog, you are not eligible to win it again. Winner is subject to eligibility verification.”


And now for the giveaway...
(open to Canadians & Americans)