Filled with excitement and intrigue: "In Dreams Forgotten" by Tracie Peterson 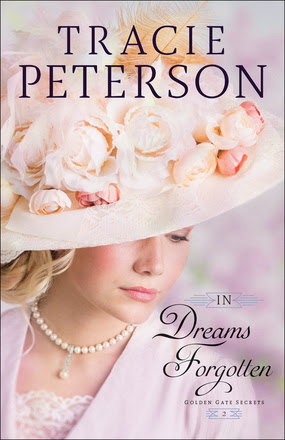 
Finding her family could cost her everything.

Judith Gladstone came to San Francisco after her parents died to find her last living relative, an aunt she never knew she had. Instead she has fallen head over heels in love with Caleb Coulter, her friend's brother. Caleb has promised to help Judith find her aunt, but she can tell he thinks of her only as a friend, and she struggles to hide her feelings whenever she is with him.

When Caleb traces Judith's aunt to the wealthy Whitley family, Judith is united with her long-lost relatives. The truths she learns about her past and her parents are shocking and overwhelming, however, and the more she gets to know her new family, the more danger she uncovers. Someone feels threatened by Judith's appearance in the Whitleys' lives, and they will do whatever it takes to get rid of her.

Peterson's second installment in the "Golden Gate Secrets" novel is one filled with excitement and intrigue and, of course, culminates with a thoroughly happy ending (just what I was in the mood for!) When I was initially introduced to the quiet but likeable Judith Gladstone in the first book in the series, I wasn't quite sure what to expect from her knowing that she would now be starring in her own novel. But she certainly rises to the occasion with plenty of pluck and grit as the novel unfolds.  And I can attest that the events of her past that are revealed in this story were nothing that I expected at all, with the result being that I devoured this novel in short order to see how things would turn out!

I most appreciated the steady faith that Judith and Caleb both cling to and emulate over the course of the novel, providing a powerful contrast of the difference such faith makes as opposed to the all-consuming greed and conniving ways of Judith's family. Judith's tale serves as a reminder to us all that longing after money never leads to a good end, and really results in misery for all involved. It's funny that despite the fact we may know that, we still often find ourselves pining for the false security that wealth offers!

All in all, I quite enjoyed journeying along with Judith and Caleb, finding them to be likeable characters who are easy to relate to, with their own unique dance towards love. And Peterson has done a great job at setting the scene for the final tale of the novel,  when the broken hearted Kenzie Gifford has her turn headlining a novel. As for "Golden Gate Secrets", I give this book a high recommendation and rating of 4.5 out of 5 stars, certain that Peterson's faithful readers will surely enjoy this book as much as I did.

Tracie Peterson (www.traciepeterson.com) is the bestselling, award-winning author of more than 100 novels. Tracie also teaches writing workshops at a variety of conferences on subjects such as inspirational romance and historical research. She and her family live in Montana.