Simply excellent: "Hidden Among the Stars" by Melanie Dobson 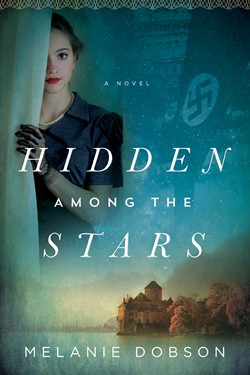 At the dawn of the Nazi's reign in Austria, Annika Knopf feels far removed from the changes happening in her beloved country. But her role as daughter of the caretaker of Schloss Schwansee, the castle belonging to her childhood friend Max Dornbach, leads her to make an unexpected discovery about the Dornbach family, one that places the entire family is danger. 80 years later, Callie Randall is content in her corner of modern day Mount Vernon, Ohio, operating the bookstore she owns with her sister, and carefully guarding her heart after suffering rejection from a former fiance. But after Callie discovers a book with hidden entries, she finds herself pulled from her rather predictable life, set on a journey that intersects with the past in startling and unexpected ways.

Melanie Dobson has written another absorbing novel that weaves together past and present in a manner that makes for addictive reading. The characters have been carefully drawn with her sure hand, and she brings history to life as she describes the struggle of the Jewish people in Austria, their efforts to flee to safety, and the fascinating events of  Hallstattersee. There were many moments in the story that had my heart pounding, not only as the characters met danger around every turn, but as unexpected decisions were made of supreme sacrifice. The ending chapters are both satisfying and realistic, leaving you with a bittersweet longing that history could have perhaps turned out differently. Reading a story like this leaves me hoping for what Heaven will be like, when all tears are wiped away and people no longer have to live in fear. Dobson has written a beautiful story, one that will find you appreciating the strong and brave characters who star in the pages of this book, showing us the way to live out our own lives with courage.

Fans of Dobson's prior novels are going to love this one as well. I highly recommend this excellent novel and award it 5 out of 5 stars.

Melanie Dobson is the award-winning author of nearly twenty historical romance, suspense, and time-slip novels including Catching the Wind and Chateau of Secrets . Three of her novels have won Carol Awards; Love Finds You in Liberty, Indiana won Best Novel of Indiana in 2010; and The Black Cloister won the Foreword Magazine Religious Fiction Book of the Year.

Melanie is the former corporate publicity manager at Focus on the Family and owner of the publicity firm Dobson Media Group. When she isn't writing, Melanie enjoys teaching both writing and public relations classes at George Fox University.

Melanie and her husband, Jon, have two daughters. After moving numerous times with work, the Dobson family has settled near Portland, Oregon, and they love to hike and camp in the mountains of the Pacific Northwest and along the Pacific Coast. Melanie also enjoys exploring ghost towns and abandoned homes, helping care for kids in her community, and reading stories with her girls.