An intriguing start to the saga: "Mark of the Raven" by Morgan L. Busse 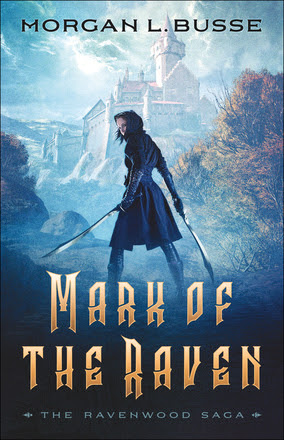 Lady Selene Has Come into Her Family's Power.
But Has She Inherited a Gift or a Curse?


Lady Selene is heir to the House of Ravenwood and the secret family gift of dreamwalking. As a dreamwalker, she can enter a person's dreams and manipulate their greatest fears or desires. Soon after the gifting, however, Selene discovers that the Ravenwood women have been secretly using their gift to gather information or to assassinate those responsible for the fall of House Ravenwood to the Dominia Empire hundreds of years ago.

As she becomes more entrenched in Ravenwood's dark past, Selene longs to find out the true reason behind her family's gift, believing that its original intent could not have been for such evil purposes, but she is torn about upholding her family's legacy--a legacy that supports her people. Selene's dilemma comes to a head when she is tasked with assassinating the one man who can bring peace to the nations--but who is also prophesied to bring about the downfall of her own house.

One path holds glory and power and will solidify her position as Lady of Ravenwood. The other path holds shame and likely death. Which will she choose? And is she willing to pay the price for the path chosen?

I'm not sure how I'm so late to the scene in my discovery of Morgan L. Busse, but if you are like me and have never picked up one of her books before, make sure you definitely snatch up a copy of her latest, "Mark of the Raven"!

Busse effortlessly spins out a tale of mystery and intrigue as she plunges you into a fantastic world of seven Houses and an empire that is seeking to destroy them. Lady Selene is one of those characters who you instantly connect with and find yourself rooting for, as she finds herself training to become what her mother has long groomed her to become, an assassin who not only can wield swords with strength and speed, but can enter into people's dreams and use their fears against them. As Lady Selene finds herself wrestling against her assumed destiny, I couldn't help but become impatient as I churned through the pages. Surely she wouldn't be forced to use her gifts to bring about death would she? I could barely wait to find out, and of course I won't spoil a thing for anyone else about what lies in store for Lady Selene. But suffice it to say that I picked up this novel just expecting to start with a chapter or two, and hours later found myself still mesmerised by the story that was unfolding. By the time I came to the final pages, my only fault with the book was that it had come to the end too soon as I was not at all ready to part from Selene or the other characters who shared the story with her. How ever will I wait for the next instalment?

Readers who already enjoy fantasy, or perhaps those who have never given this genre a chance, are going to love "Mark of the Raven". The plot is unique and just complex enough to pull you in without making you work at understanding what's going on, while the characters will have you caring about them (or perhaps strongly disliking them, depending on who we are talking about). And most of all, the spiritual parallels will give you a fresh appreciation for the power of God's Light to conquer the darkness. I, for one, loved this book, and award it 5 out of 5 stars.

Morgan L. Busse (www.morganlbusse.com) is a writer by day and a mother by night. She is the author of the Follower of the Word series and the new steampunk series The Soul Chronicles. Her debut novel, Daughter of Light, was a Christy and Carol Award finalist. During her spare time she enjoys playing games, taking long walks, and dreaming about her next novel. She and her family live in Bloomington, Illinois.