Another solid addition to the High Sierra Sweethearts series: "The Reluctant Warrior" by Mary Connealy 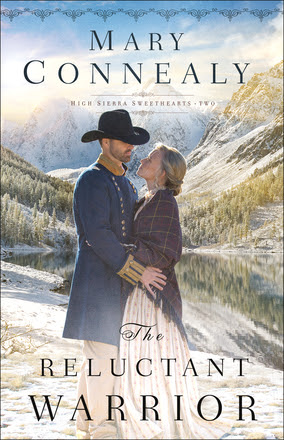 He Thought His Toughest Tests Were behind Him.

But Nothing Could Prepare Him for Trying to Win Back the Love of His Daughter.


Union army officer Cameron Scott is used to being obeyed, but nothing about this journey to Lake Tahoe has gone as expected. He's come to fetch his daughter and nephew, and seek revenge on the people who killed his brother. Instead finds himself trapped by a blizzard with two children who are terrified of him and the stubborn but beautiful Gwen Harkness, who he's worried may be trying to keep the children.

When danger descends on the cabin where they're huddled, Cam is hurt trying to protect everyone and now finds Gwen caring for him too. He soon realizes why the kids love her so much and worries that it might be best for him to move on without them. When she sees his broken heart, Gwen decides to help him win back their affection--and in the process he might just win her heart as well.

With clever dialogue, heart-warming moments, and enough mystery and intrigue to keep the pages turning, Mary Connealy's latest novel will no doubt please her fans of her cowboy romances! Those readers who enjoyed the first book of the High Sierra Sweethearts series will enjoy reconnecting with the characters from that first novel, with a greater focus on the brave but soft-hearted Gwen and the gruff Cameron Scott who threatens to take away the children that Gwen grew to love in the first book in the series. "The Reluctant Warrior" opens with a bang and Connealy infuses plenty of drama as things progress as the characters race not only to survive the elements but to find the man who has brought so much death to the wagon train trail. Now that said, there were a couple of slower moments for me and parts of the book that felt a bit predictable, but I really enjoyed watching Cam learn to bond with the children and work to change to become a better man. And the love that grows between Gwen and Cam is natural and filled with moments of humour, which I greatly appreciated because we all know that in reality our relationships are filled with lots of bumbling and laughs along the way!

Connealy brings Gwen and Cam's story to a fine resolution in the closing chapters, an ending filled with danger and courageous moments and the hand of God sustaining them through the fear. And Connealy does a nice job at setting up the third and final instalment of the series, which will focus on Cam's sister Penny and a crazy adventure that awaits her! As for "The Reluctant Warrior", I give this novel a solid rating of 4 out of 5 stars.