Explodes with action: My review of Covenant of War by Cliff Graham

Exploding with action, Covenant of War is the second book in the Lion of War series from Cliff Graham. The book continues the story of David and his band of 30 men as David battles to secure the throne of Israel that Yahweh has willed him to occupy. Just as David is struggling to unite a fractured Israel, he and his men must face the ultimate enemy - the powerful Philistines, who are determined to rape and plunder and subdue the Hebrew people. David, along with his elite warriors, must face impossible odds, a horrific drought, and their own discouragement to determine the fate of an entire nation.

As with the first book in the series, I was immediately swept into the story of David and the Mighty Men of Israel. The book is impossible to put down, and the scenes played like a vivid movie in my mind. The action is non-stop, and the writing sizzles with tension. If possible, I enjoyed this novel even more than the first! I find it amazing that the author can take passages from the Bible, as found in 2 Samuel 23 and 1 Chronicles 11, and create a white-knuckle plot that held me captive! My favourite scenes are the ones that reveal David's heart and his incredible passion for God evidenced in his absolute remorse over his misdeeds! The supernatural visitations that occur in the book are, quite simply, fascinating to behold, and it made me long to be standing there witnessing such things occur.

I cannot recommend this book highly enough. I especially encourage men to pick up this book and meet David the warrior and David the priest, a man known for his passions in all areas of life, but especially towards God. Live and breathe the Word of God like never before with Covenant of War. 5 out of 5 stars. 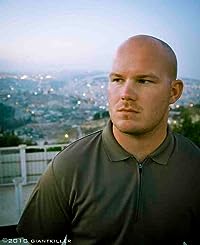 Cliff Graham is the author of the "Lion of War" series of novels based on King David's Mighty Men, soon to be a major motion picture franchise. He was born in Dallas, Texas and grew up in Rapid City, South Dakota. He graduated from Black Hills State University with degrees in political and military science. He is an officer in the United States Army and veteran of Operation Enduring Freedom, currently serving in the Chaplain Corps. He names Michael Shaara, Steven Pressfield, Louis L'Amour, and Bernard Cornwell as the most influential authors in his career.
Cliff and his wife Cassandra live in the mountains of Utah with their children.