A wonderful continuation of the series: My review of "He Who Lifts the Skies"

He Who Lifts the Skies continues the story of Shem and Annah begun in The Heavens before, but this time focuses more on their great-granddaughters Sharah and Keren. Since the end of the flood, the descendants of Noah have spread across the Earth, becoming too numerous to count. Down on the plains, in the Great City, Nimr-Rada has become like a king, and led people away from worshipping the Most High. When Nimr-Rada captures Sharah and Keren to use in his plans to challenge the Most High by erecting the tower of Babel, Sharah willingly embraces the role he has for her, but Keren refuses to bow to his whims. Her very life becomes threatened as she must choose between following Nimr-Rada or remaining true to the Most High.

Kacy Barnett-Gramckow has spun an exciting, absorbing read in this second installment of The Genesis Trilogy. The book again breathes new life into a tale recounted in the Bible, exploring possibilities of what might have been while attempting to remain true to Scripture. The result in a fascinating imagining of what led up to the building of the tower of Babel, with original characters whose actions will invoke your emotions. Keren is my favourite character, full of spunk and life, all too human in her errors and mistakes, but ultimately with a heart that is sensitive to the calling of the Most High. The book is written in splendid prose, with plenty of action to keep the story moving along, making this a difficult book to put down. I walk away from the book realizing how easy it is for people to turn away from God, even in the face of amazing miracles and awe-inspiring displays of his power. He Who Lifts the Skies is a highly recommended read, and I award it 5 out of 5 stars.

I received this book free from Moody Publishers as part of their Blogger Review Program. I was not required to write a positive review. The opinions I have expressed are my own.

Learn more about the book at the product page at Moody Publishers. 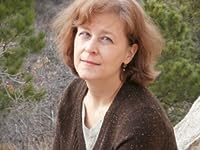 Kacy Barnett-Gramckow is the author of Moody Publisher's THE GENESIS TRILOGY: The Heavens Before, He Who Lifts the Skies, and A Crown in the Stars. Kacy also writes Christian Fantasy Fiction.

Kacy finds research almost as interesting as writing, and she brings a lively knowledge of history to bear on her settings and characters. She and her husband, Jerry, have been married for more than thirty years, and they live in Colorado.