GIVEAWAY & my review of The Last Temple by @HankHanegraaff and @SigmundBrouwer1

Check out my review of "The Last Temple" and make sure you enter my giveaway at the end for your own copy of the book! 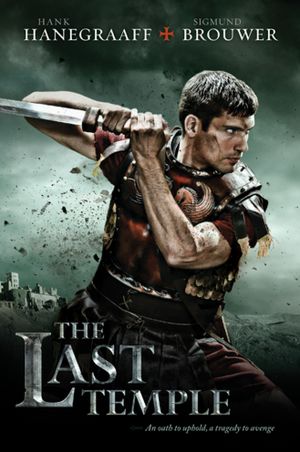 Return to the Roman Empire in the final installment of the Last Disciple Trilogy, The Last Temple, as Gallus Sergius Vitas finds himself playing a role in the fulfillment of both Jesus' prophecy and the prophecy shared through the book of Revelation, prophecies about the Roman empire and the destruction of the temple in Jerusalem. Vitas remains a fugitive from Emperor Nero, and agrees to pose as a slave to his brother to help spy on a household. The situation ends in disaster and near death for Vitas, but also miraculously leads to a reunification with his wife and child. After a year spent with his family, a determination to repay debts to powerful friends who saved his life bring Vitas out of hiding and back to first Rome to help coordinate the downfall of Nero, and then later Jerusalem as the Roman Empire turns their wrath on the Jews who have rebelled against Roman rule.

The Last Temple is a satisfying conclusion to a strong trilogy that I have greatly enjoyed from start to finish. The historical details are fascinating, as the story follows the downfall of Nero to the utter destruction of Jerusalem. I can say with utter honesty that reading this book and indeed the entire series has made my experience of reading the Bible to be so much richer. The authors have done a fantastic job of capturing both the Roman and Jewish cultures of that era, from the decadence and perversion of the Roman empire, to the zeal of the Jewish people as they revolted against the oppression of Rome. For the first time I am able to understand the amazing significance that the fulfillment of Jesus' prophecy about the destruction of Jerusalem holds. Numerous characters in these stories share their disbelief that Jerusalem, with its fortifying walls and endless supply of water, could ever truly be destroyed. And yet to watch this unfold through the pages of this book is powerful indeed, and gives me a greater appreciation of this occurring.

Like the first two books in the series, the story is well-written, fast-paced, and entertaining, and I definitely plan on reading this trilogy over again in the future - it's just that good! If you are looking for a captivating historical read, then pick up this book. 4.5 out of 5 stars.

Check out a neat trailer made for this book...

Hank Hanegraaff serves as president and chairman of the board of the North Carolina–based Christian Research Institute International. He is also host of the Bible Answer Man radio program, which is broadcast daily across the United States and Canada as well as around the world through the Internet at http://www.equip.org.

Widely considered to be one of the world's leading Christian apologists, Hanegraaff is deeply committed to equipping Christians to be so familiar with truth that when counterfeits loom on the horizon, they recognize them instantaneously.

Whether writing youth or adult fiction, Sigmund Brouwer is a best-selling author of more than 40 fast-paced novels. Some of his works encourage young reluctant readers into the world of books, and others provide adults with riveting tales. His youth series include Mars Diaries; Short Cuts Extreme Sports; Lightning on Ice; CyberQuest; The Winds of Light; Dr. Drabble: Genius Inventor; and The Accidental Detectives. His adult fiction titles include Out of the Shadows, Morning Star, Thunder Voice, Double Helix, and Blood Ties.

READY TO BUY? BOOK MAY BE PURCHASED FROM....


AND NOW FOR THE GIVEAWAY...

I am giving away 1 copy of "The Last Temple" to readers from the U.S. and Canada, courtesy of the publisher, Tyndale.

You can get 1 entry into the giveaway for each task you perform:

2. "Like" my Facebook page, and let me know you did so in a comment. (The link is at the top of the webpage). Let me know if you've already liked it, and I'll give you an entry.

4. Leave a comment answering the following question: "If you'd been born in the period of time this series is set in, would you rather have been born a Roman citizen or born Jewish? Why?"

++ Please include your email address in your comment so I can contact you to arrange to get the book in the mail to you.