Fans of the "Restoration Series" will rejoice: My review of "The Desire" 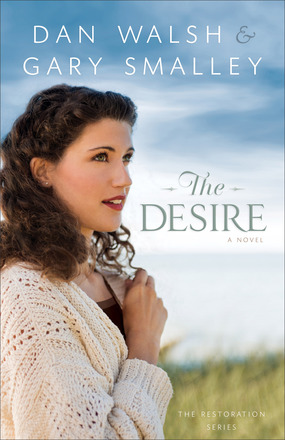 Can faith build a bridge between their dreams?

For two years, Allan and Michele have been trying to have a baby. The emotional ride has been taking a toll on their hearts--and their relationship. Michele is obsessed with researching fertility treatments while Allan seems content to spend his time--and their money--on supporting displaced children in Africa. Something's got to give. But they both hope it's not their marriage.
Still, God has a plan for Allan and Michele that they could never have imagined. And all it takes to set it in motion is a change of heart . . .

"The Restoration Series" continues in fine form with the third addition to the series, "The Desire". While the first book focused on the healing of Marilyn and Jim's marriage, and the second book followed their son Tom and his wife through some major challenges, this third installment primarily focuses on Marilyn and Jim's daughter Michelle and her husband Allan. The authors explore the couple's struggle with infertility in a compassionate and realistic manner, set against a fascinating backdrop of Allan's trips to Africa and the children he encounters there. Like the first two books in the series, this one certainly grabbed my attention from the get-go, and I really enjoyed watching the characters face their struggles head on. I did find this book a tad more preachy than the first two books as it seemed there was more telling than showing going on. For example, much of Michelle's insights and changes happened because of a book she read that she then quoted to Allan to explain the changes in her attitude. Had she learned the similar lesson strictly through encounters she had with other people, I would have found that to be more natural. Nevertheless, my heart was completely engaged in their struggle, and I thought the plot moved along well. The twists the authors threw in had me racing through the pages to see how things would unfold in the end. I will say that my favourite scenes were those that took place in Africa, and they depicted the people and place with such vivid realism that I wanted to head over there myself to wrap those kids in my arms and assure them all would be well. I definitely battled tears with some of the scenes. The ending of the book is all the sweeter for the hard journey that brings the characters there, and I guarantee you will close the book with a smile on your face...and a hunger to see these characters again.

I continue to enjoy the time I am spending with the Anderson family, and am convinced others will certainly agree that this book (and the prior two) are definitely worth the read. I award this book a solid recommendation and award it 4 out of 5 stars.

Dan Walsh is the bestselling author of several books, including The Dance and The Promise with Gary Smalley, as well as The Unfinished Gift, The Discovery, and The Reunion. He has won three Carol Awards, and two of his novels were finalists for RT Book Reviews Inspirational Book of the Year for 2011 and 2012. A member of American Christian Fiction Writers, Dan served as a pastor for twenty-five years. He lives with his wife in the Daytona Beach area, where he's busy researching and writing his next novel. Visit www.danwalshbooks.com for more.

Gary Smalley is one of the country's best known authors and speakers on family relationships. He is the bestselling and award-winning author or coauthor of 16 books, along with several popular films and videos. He has spent over 30 years learning, teaching, and counseling, speaking to over 2 million people in live conferences. Smalley has appeared on national television programs such as Oprah, Larry King Live, Extra, The Today Show, and The Sally Jessy Raphael Show, as well as numerous national radio programs. Gary and his wife, Norma, have been married for 49 years and live in Branson, Missouri. They have three children and six grandchildren.