A fun mystery! "A Fool and His Monet: A Serena Jones Mystery" by Sandra Orchard 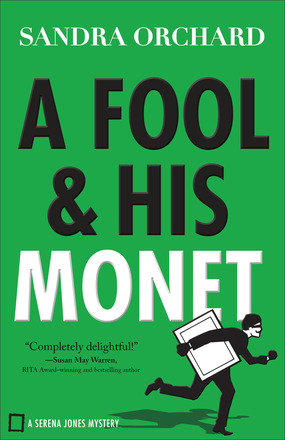 Serena Jones has a passion for recovering lost and stolen art--one that's surpassed only by her zeal to uncover the truth about who murdered her grandfather. She's joined the FBI Art Crime Team with the secret hope that one of her cases will lead to his killer. Now, despite her mother's pleas to do something safer--like get married--Serena's determined to catch thieves and black market traders.
When a local museum discovers an irreplaceable Monet missing, Serena leaps into action--and a whole heap of trouble.


Sandra Orchard has crafted a totally fun mystery in "A Fool and His Monet", a book that kept me glued to the pages not only because I wanted to find out who was behind the theft of the paintings, but because I couldn't get enough of the characters! Serena is utterly likeable, and while she certainly is a competent enough FBI agent, she's plenty human at the same time and makes all those sorts of errors we all do - such as rushing into things at times without thinking it through properly! Although this book isn't a romance, Orchard introduces a couple of possible love interests, and you will find it hard to decide who to root for more, Nate or Tanner. As a male reader, I appreciated that there was absolutely no mushy scenes at all, but the undercurrents of attraction make for some engaging reading. I think it is very clever indeed that at the end of the book you even find out that you, as a reader, have the opportunity to vote for who Serena should end up with. Now if that isn't brilliant marketing, I don't know what is (and good luck making your choice!). Despite my enjoyment of Serena as a character, I do need to mention that I think my most favourite character is Serena's Aunt Martha, a woman who is just downright hilarious at times with her zany antics!

Sandra Orchard is the award-winning author of many inspirational romantic suspense and mysteries, including Deadly Devotion, Blind Trust, and Desperate Measures. Her writing has garnered several Canadian Christian Writing Awards, a Romantic Times Reviewers' Choice Award, a National Readers' Choice Award, a HOLT Medallion Award of Merit, and a Daphne du Maurier Award for Excellence in Mystery/Suspense. In addition to her busy writing schedule, Sandra enjoys speaking at events and teaching writing workshops. She lives in Ontario, Canada. Learn more about Sandra's books and check out the special bonus features, such as deleted scenes and location pics, at http://sandraorchard.com.