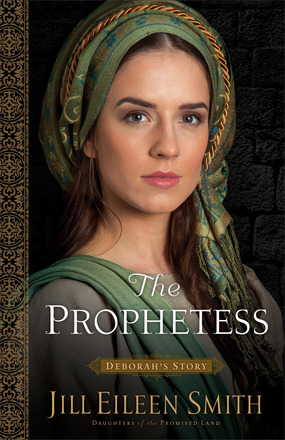 Canaan has ravaged Israel. The people are in hiding. All that stands between surrender and hope is one untested woman.

Deborah will never forget the day her father and brothers left to worship at the Lord's tabernacle--or the wails of her mother after finding their bodies at the city gates. The memories of Canaan's cruelty haunt her and all of Israel. Now in this dark time, the Lord calls on Deborah to lead His people away from the idols of other nations and back to Him.

Deborah never asked to be a prophetess or a judge over God's people. Still, she cannot deny His voice or the visions that accompany it. Can her family ever understand? Will her people believe God's calling on her life? And can the Canaanite menace be stopped?

With her trademark impeccable research and imaginative storytelling, Jill Eileen Smith brings to life the story of Israel's most powerful woman in this intriguing and inspiring novel.


"The Prophetess" brings to life a character of the Bible that I am sad to admit I have never spent much time thinking about. Deborah's role as judge in a thoroughly patriarchal society is a fascinating one to consider. Why did God choose her to be his mouth piece? Why did he choose her to lead a group of men who must have wondered at times why God made the choice he did? I really enjoyed how the author explores the impact it would have had on Deborah's husband to be married to such a strong leader of a woman.

Although Smith has, of course, had to take much poetic license in fleshing out Deborah's character, she has done so in a way that is faithful to the details and tone of scripture. She has captured the hopeless of the Israelites during that time, and created a host of characters around Deborah that makes for a multi-layered plot that drew me into the story. Now, I did find that the middle of the story dragged for me in some places, perhaps only because I was waiting for God to act and rescue his people, a sentiment no doubt shared by the people of that time! But then the story explodes into action as God speaks through Deborah and gives the order to go to war and to free his people. The battle scenes are vivid but not so violent as to turn away readers who are more sensitive about such things, and the moment of Sisera's death is likewise handled well.

I am so thankful to Jill Eileen Smith for again bringing to life a story from the Bible in a way that leaves me deep in thought about how God will use even the unexpected to carry out his will. It makes me feel that there is hope for me yet, even with all my own flaws! I award this book 4 out of 5 stars.

Jill Eileen Smith is the author of the bestselling Wives of King David series and The Crimson Cord, as well as the Wives of the Patriarchs and the Loves of King Solomon series. Her research has taken her from the Bible to Israel, and she particularly enjoys learning how women lived in Old Testament times. She lives with her family in southeast Michigan.
Jill loves to hear from her readers. Contact her at www.jilleileensmith.com, or follow her on Facebook at www.facebook.com/jilleileensmith or Twitter @JillEileenSmith.