What if reality is only the edge of possibility?

There isn't much that can throw Charlie Hazard off balance. But the mystery woman with the striking eyes and the intense request to follow her--now--is about to shake his world. Knowing little more than her name, Charlie leaves his post as a guard at the Satellite Beach community center for what he thinks is just another risk-containment job. But Gabriella, an experimental psychologist, has far more in store for him than protection duty--if the two of them survive the test.

Reese Clawson relishes her work at the Combine and all the perks and power that come with it--including the ability to manipulate perceptions. But the Combine never anticipated this mind-shifting technology. If Gabriella's experiments succeed, the Combine would be destroyed. And Reese will never allow that to happen.


Thomas Locke has once again offered up an un-put-downable adventure with his latest novel, "Fault Lines". I didn't realize at first that this novel is actually a prequel to the entire "Fault Lines" series, and at first as I dove into the story I wasn't sure if my attention would be held as is usually the case with Locke's novels. But let me assure you that if you have read the other two books in the series, you are going to devour this one! I loved getting to know a whole new side of Charlie Hazard along with the other characters we see in the next two novels.

"Fault Lines" is tightly plotted, often moving at a break-neck pace that left me with no option but to read long into the night. I savoured every word that Locke delivered, from his descriptions of people and places, to the intriguing concepts of characters experiencing out-of-body encounters. Despite being speculative in nature, his writing feels grounded in reality such that I felt like I would be able to step into Charlie's shoes and experience an ascent for myself! I think what I most appreciated about this book in particular is that these characters don't have it all put together perfectly. Rather, they have doubts and struggles, pasts filled with hurts along with the resulting insecurities, all things that readers will be able to relate to. Add in a dash of pure adventure and just plain fun, and by the time I read the final lines I had a smile on my face.

The entire Fault Lines series has been a fantastic experience that is not to be missed, and I plan to come back in the future and read each of them all over again. I have no doubt that I will love them as much the second time round as the first! If you haven't yet had the pleasure of delving into these books, then wait no longer. I award this novel a high rating of 4.5 out of 5 stars. 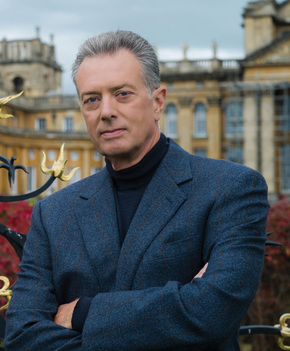 Thomas Locke is a pseudonym for Davis Bunn, an award-winning novelist with worldwide sales of seven million copies in twenty languages. Davis divides his time between Oxford and Florida and holds a lifelong passion for speculative stories. He is the author of Emissaryand Merchant of Alyss in the Legends of the Realm series, as well as Trial Run and Flash Point in the Fault Lines series. Learn more at www.tlocke.com.