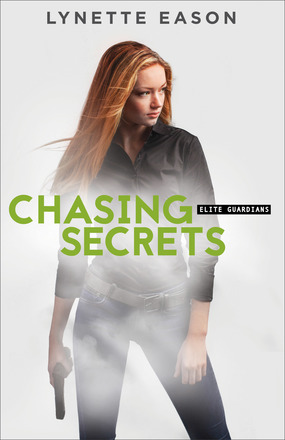 
The bodyguards of Elite Guardians Agency have it all.


When a photo leads investigators in West Ireland to open a twenty-five-year-old cold case, Elite Guardians bodyguard Haley Callaghan's life is suddenly in danger. Haley knows how to take care of herself; after all, she's made a career out of taking care of others. But after she has an uncomfortably close call, Detective Steven Rothwell takes it upon himself to stay with her--and the young client she has taken under her wing. A protector at heart, he's not about to let Haley fight this battle alone.

In a sweeping plot that takes them into long-buried memories--and the depths of the heart--Haley and Steven will have to solve the mystery of Haley's past while dodging bullets, bombs, and bad guys who just won't quit.

Eason once again proves she is one of the top authors in the romantic suspense genre with her final book in the "Elite Guardians" series, "Chasing Secrets". Each of the women starring in the series has had much to love about them, but I think that Haley may be one of my favourites! Her ability to kick butt, along with her mysterious past and her strong heart for the underdog, make her a winner. The plot doesn't rest for a moment, just the way I like my suspense novels to be crafted, with the scenes packed full of action and unexpected moments. In fact, although I had a sense of who was behind the attacks taking place, the plot definitely took a twist I didn't see coming, and I found myself barely stopping to breathe as I raced through the final chapters. Now that makes for absorbing reading! Like the best authors do, in the midst of the heart-pounding scenes, Eason weaves in deeper themes as well, exploring pieces of her character's past that have them confronting some dark emotions and struggling to forgive. God's love definitely shines through the characters actions in an inspiring way.

For those readers most eager for the romantic stuff, I can assure you that Haley and detective Steven together make quite the crime-fighting duo, with tender moments woven into the plot in a way that will have readers starry eyed. And the ending not only puts a nice finishing touch on "Chasing Secrets" itself, but is a great way to turn the last page in the series as a whole.

I highly recommend this book and award it 4.5 out of 5 stars. While the book could be read as a stand-alone novel, if you haven't yet given a book in this series a try, I encourage you to start with the first book in the series and then make your way to "Chasing Secrets". Each book is well worth the time invested, and you will be glad to end with Haley's entertaining story!

Lynette Eason is the bestselling author of the Women of Justice series, the Deadly Reunions series, and the Hidden Identity series, as well as Always Watching, Without Warning, Moving Target, and Chasing Secrets in the Elite Guardians series. She is the winner of two ACFW Carol Awards, the Selah Award, and the Inspirational Readers' Choice Award. She has a master's degree in education from Converse College and lives in South Carolina. Learn more at www.lynetteeason.com.