Another thrilling read: "The Assault: Cycle Two of the Harbingers Series" by Peretti, Myers, Hunt, and Gansky 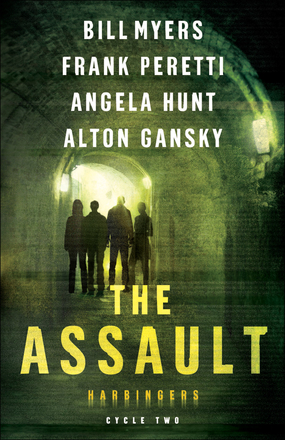 As Darkness Threatens, Four Gifted People Will Give the World Its Best--And Maybe Only--Chance to Survive. This is Harbingers.

In Invitation, four beloved and bestselling suspense authors introduced supernaturally gifted characters on a race to stem the tide of growing evil. Now Bill Myers, Frank Peretti, Angela Hunt, and Alton Gansky return with the next cycle of fast-paced and riveting tales.

In Bill Myers's "The Revealing" the team finds themselves in Rome trying to retrieve the mystical spear Hitler once stole. The task will take them from hidden chambers inside the Vatican to a mysterious seaside cave with unexpected and dangerous powers.

Frank Peretti's "Infestation" tells of a microscopic plague unleashed on the world that deceives, blinds, kills, then spreads and kills again. The Harbingers team must confront this faceless evil bent on seducing and destroying humankind.

In "Infiltration" by Angela Hunt, a seaside respite intended to buy time for the wounded team turns deadly when misplaced trust leads the Harbingers into dangerous waters.

Alton Gansky's "The Fog" reveals a supernatural mist unlike any other, filled with vicious monsters that kill whatever they find. When one team member realizes the only way to stop the fog is to enter it, the ultimate sacrifice must be made.

Four of my favourite suspense authors have again delivered up a collection of inter-connected stories that were all I was hoping for! Filled with mind-bending supernational scenes, action packed moments, and even bits of humour thrown in throughout, "The Assault" feels like an even stronger accomplishment than the first cycle of the series.

By now, I have a good understanding and feel for the different characters, and am greatly enjoying how each novella is moving the story forward. The premise of the books, with authors writing each novella from a different point of view from each character, continues to be a winning formula, and truly the comparison to a TV series is fitting. The crisp writing of each author and the suspense-filled scenes combine to make you feel like you truly are watching the story unfold on the screen. And I think what I like most is the fact that because each author is putting their own spin on their novella, I start each one not quite knowing what is coming. Nothing makes me happier than being surprised by a good story, and such is the case with this collection. I also continue to enjoy the unfolding fight between good versus evil, and the authors have given evil unexpected faces indeed! It would be hard for me to choose which one of these novellas I enjoyed the most, as each had something to appreciate. But I can say that I came to the end of the last one eager to see what lies in store for this intriguing cast of characters.

I greatly enjoyed this second cycle of the Harbingers series, and am confident that if you enjoyed the first cycle like I did, then you are going to love this one too! I award this book a solid rating of 4 out of 5 stars.