Will gladden your heart: "The Promise of Dawn" by Lauraine Snelling 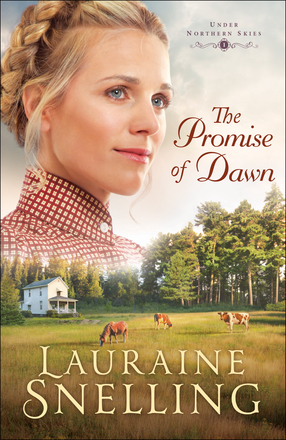 In a Compelling New Saga, One Family Strives to Make Their Own Future


Opportunities are scarce in Norway, so when Rune and Signe Carlson receive a letter from Rune's uncle, Einar Strand, offering to loan them money for passage to America, Rune accepts. Signe is reluctant to leave her home, especially as she is pregnant with her fourth child, but Einar promises to give them land of their own, something they could never afford in Norway.

But life in Minnesota is more difficult than Signe imagined. Uncle Einar and Aunt Gerd are hard, demanding people, and Signe and her family soon find themselves worked nearly to the bone to pay off their debt. Afraid they will never have the life they dreamed of, she begins to lose her trust in God. When the dangers of the North Woods strike close to home, will she find the strength she needs to lead her family into the promise of a new dawn?


You know those books where you go to put them down, and a few minutes later you find yourself sneaking back to pick it up and just catch a few more pages? That is the essence of "The Promise of Dawn" for me, a book that for some reason I unexpectedly couldn't walk away from. Usually it's the non-stop action suspense novels that draw me in like that, but I just couldn't get enough of these characters, experiencing life with Signe and Rune and their children as they come to America and face unexpected hardship with their demanding relatives. I loved watching how the family buckles down to work harder than they believed was possible, how they braved mean and verbally abusive relatives who they just had to choose to love, as God called them to do. I found myself utterly moved by their choices to forgive, to respond in love instead of returning hate with more hate. And I think some of my favourite moments involved the times that the Carlson's children so innocently chose to offer good instead of evil, moments that truly touched me deeply. The result is that spending a few hours struggling alongside these characters warmed my own soul. The ending doesn't entirely resolve everything, leaving you wanting to know more about how this family ultimately made out in the new country they'd committed themselves to, but things draw to a close in a way that will leave you with a smile on your face.

This first novel in the "Under Northern Skies" series is a satisfying journey, not only of a family uprooting themselves from Norway to pursue fresh opportunities in America, but of a simple people demonstrating God's love in a way that breathes new life where all hope seemed lost. I award this book a solid 4 out of 5 stars, and am eager for what lies in store in the next book in the series.

Lauraine Snelling is the award-winning author of more than 70 books, fiction and nonfiction, for adults and young adults. Her books have sold more than 4 million copies. Besides writing books and articles, she teaches at writers' conferences across the country. She and her husband make their home in Tehachapi, California. Learn more at www.laurainesnelling.com.