Have your hanky handy: My movie review of "When the Game Stands Tall" 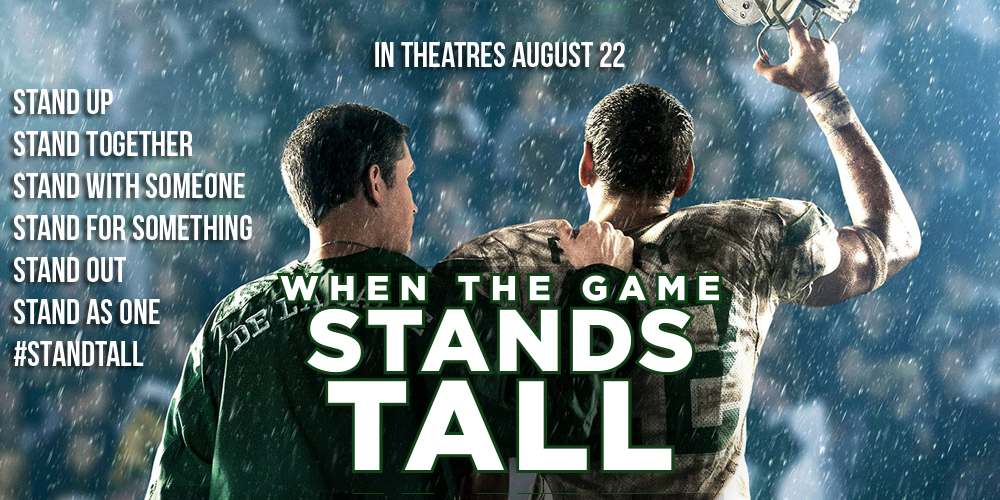 If you don't have plans tonight, then I highly recommend you go see the movie "When the Game Stands Tall"! Read on for my review.

Inspired by a true story, When The Game Stands Tall brings to life the incredible winning streak of the De La Salle High School football team: 151 straight victories over 12 years. All along the way, as Coach Bob Ladouceur (Jim Caviezel) builds his seemingly invincible national powerhouse, he has emphasized purpose and significance rather than streaks and titles. When the streak is broken, and tragedy strikes the team, Coach Ladouceur must teach his players – and the entire town – that it’s not about how you fall, but how you get back up.

I am one of those unusual males who does not thrive on watching hours of sports on television - I'd rather read a book! Yet give me the chance to watch a sports-inspired movie and I will jump at the opportunity. The reason? Such films are totally inspiring, and "When the Game Stands" is one of the best sports films to come along in awhile! This is a movie that your whole family can enjoy without worrying about offensive material. The acting is solid, with great performances by a number of talented actors, and I was completely drawn into the storyline. I found myself mesmerized by the action on the screen, to the point that I was gripping my arm rests to see how the football games would play out!

Prior to this film, I had never heard of the De La Salle High School football team or their amazing victory streak. But I can certainly appreciate why this story was brought to the big screen. Not only is the film entertaining, but there were a number of moments where I wanted to pause the movie and go back and listen to the movie lines again because of the profound wisdom being shared. I loved watching Coach Ladouceur speak real life into the kids, fearlessly showing them what real faith looks like, and teaching them that the game, and life, is not about winning and about doing for yourself, but for coming alongside others and being true family to those around you. There were many times that I had tears in my eyes (and my wife was full-on crying), so I will warn you that be prepared to get emotional!

"When the Game Stands Tall" is a movie that I will be watching again and again, not only for the pure enjoyment of an entertaining film, but because it reminds me of what really matters in life - love, sacrifice, faith, and living for others.
My thanks to Graf-Martin for providing the opportunity to review this film.
Email Post