The perfect summer mystery book: "Murder at the Mikado" by Julianna Deering 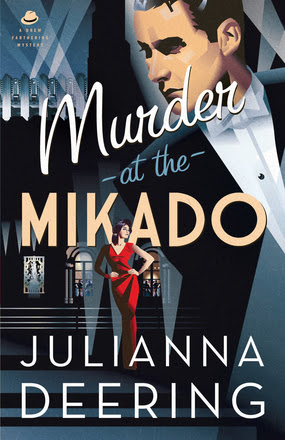 When a celebrated ACTOR IS FOUND MURDERED IN HIS DRESSING ROOM, all signs point to Drew's old flame. But behind the curtains nothing is what it seems and this quickly becomes hisMOST puzzling case YET.Just as Drew Farthering thinks his life has calmed down some, Fleur Landis, a former girlfriend, reappears, in dire need of his help. She's married now, no longer an actress--but the lead actor in her former troupe's production of The Mikado has been murdered, and Fleur is the police's number one suspect.Drew would rather focus on his fiancée, Madeline Parker, and their upcoming wedding, but he can't leave Fleur and her family in the lurch--even if she did break his heart once. As Drew, Nick, and Madeline begin investigating, they discover more going on behind the scenes of the theater troupe than could ever have been imagined. It seems nearly everyone had a motive, and alibis are few and far between.Both the murder case and the presence of the beautiful, exotic Fleur put a heavy strain on Drew and Madeline's relationship. Will their still-young romance survive the pressure?

I absolutely adore those murder mysteries that you can sink your teeth into, those ones that bring to mind the wonderful works of Agatha Christie, and so I have been very pleased with each book from Deering's talented pen. "Murder at the Mikado" is the third installment in the "Drew Farthering Mystery" series - and it had better not be the last because I just couldn't get enough! Drew and his fiancée Madeline end up back in the thick of a mysterious plot, with dead bodies piling up and questions multiplying rapidly. Add in the threat from former flames, right when you are planning a wedding, and you have all you need for a dramatic, absorbing read! This book reveals a deeper look into both Drew and Madeline as readers are given a better glimpse into their past and realize that both have made mistakes and struggle with past choices and experiences. I appreciate how Deering can take a mystery like this and yet naturally weave in elements of faith with themes of forgiveness and trust in God's leading. The mystery itself kept me on my toes from start to end, with lots of false trails thrown in along the way, something I always enjoy. The end of the book provides for some wonderful closure on one level, but leaves things wide open for a fourth book that would see the return of Drew and Madeline pursuing a mystery utterly important to Drew's past and future. Let's hope that book four is in the works, because I could happily dedicate an entire shelf of my library to the future antics of Drew Farthering!