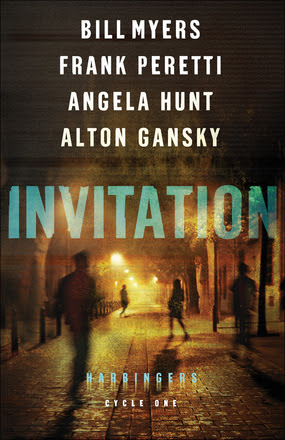 Four Strangers with Gifts They Don't Understand.  A World Falling into Darkness.

You're invited on a journey of suspense and the supernatural as four of your favorite bestselling authors team up for a unique series.

From the minds of Bill Myers, Frank Peretti, Angela Hunt, and Alton Gansky, Invitation compiles the first four episodes of Harbingers, each following a different character.

TANK--the naïve, big-hearted jock with a surprising connection to a healing power

Brought together for the first time in "The Call," the four soon realize pockets of darkness are emerging throughout the world. Whether it involves a mysterious house, the unexplainable death of animals around the world, or an otherworldly little girl, each puzzle they solve brings them closer to the ultimate explanation of what's happening. But will they discover the truth in time?

This first compilation of the "Harbingers" tales is an imaginative, clever collection like nothing else you have ever read! I absolutely adore this concept of having authors come together with an overarching storyline but still crafting their own novellas starring their character. The result is a series of stories that make for quick reads, each equally engaging and addictive. I am one of those readers who naturally gravitates to stories that mix together suspense with the supernatural, so this book is everything I could have hoped for!

The characters in "Invitation" are fun and exciting, and I like the splashes of humour throughout the stories as they interact in unexpected ways. Now, this unique concept makes for some challenges in terms of character development, and the shortness of each novella means that not every question will be answered perhaps as satisfactorily as you would have liked. But I for one am happy to give and take a little with this series because I simply enjoyed the stories so much. Overall, I found each author's writing to be solid and filled with exciting plot twists. The way the characters experience continuity in how they are depicted from story to story is also remarkable to behold!

And so, I finished the fourth part of this story wishing that I had all of the rest of the novellas of the whole series at hand as well! If you enjoy books blending suspense and the supernatural with characters you are going to adore, then plan on joining the journey of the Harbingers. I award this book a solid rating of 4 out of 5 stars.