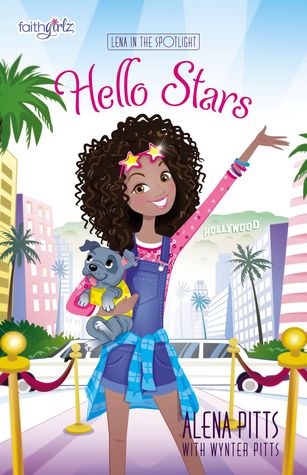 Fifth grader Lena Daniels never expected that she would be given the chance to star in a movie - and with her favourite Christian singer, Mallory Winston, none the less! But after she auditions, that is exactly what happens as she is given a leading role in a movie about a family learning to trust God. However, Lena soon discovers that being a star in the spotlight isn't all fun and games. In fact, it can be a whole lot of hard work!

"Hello Stars" is a solidly written novel firmly aimed at the pre-teens in your life. My daughters (aged 10 and 12) greatly enjoyed this book, finding it easy to relate to the characters and liking the different experiences that Lena gets to have. As a parent, I appreciate that this book showcases strong family values, something that can often be missing from fiction nowadays. I also like how prayer is a theme throughout this book, because as a parent I absolutely long for my own children to make prayer with their Father a part of every area of their lives. The novel teaches important lessons, but it does so in a fun and often humorous manner. And in a world that so often idolizes movie and music stars, can I just say how great it is that this novel offers such a reality check for tweens about what stardom is really like?

My tween daughters absolutely rave about "Hello Stars" and insisted that this book be given a solid rating of 4 out of 5 stars. I have a feeling that they will be absolutely clamouring for a copy of the next book in the series, Day Dreams and Movie Screens!

Alena Pitts is a young actress and model from Dallas, Texas. As the oldest of four girls, Alena first cut her teeth in acting through making home videos and dramas with her sisters, using their entire home as their recording studio. She has a natural love for all things creative which falls right in line with her gifts and talents. The Kendrick Brothers’ War Room marks Alena’s professional acting debut. With only school theater on her young resume, Alena jumped at a chance to audition for the role of Danielle Jordan. In addition to school and acting, Alena models and is a frequent contributor for the magazine For Girls Like You.

Wynter Pitts is the founder of For Girls Like You Magazine and the author of For Girls Like You: A Devotional for Tweens and You’re God’s Girl. The mother of four girls, Wynter’s mission is to empower and equip girls to walk boldly into becoming who God has created them to be and to provide parents with the resources and support needed to raise strong Christ followers. In addition to publishing the quarterly magazine, Wynter is a frequent blogger, a contributor for LifeWay’s ParentLife Magazine, and a public speaker. She is also the niece of Dr. Tony Evans. Wynter, her husband Jonathan, and four daughters (ages 6-11), reside in Dallas, Texas.