Excellent in every way! "A Name Unknown" by Roseanna M. White 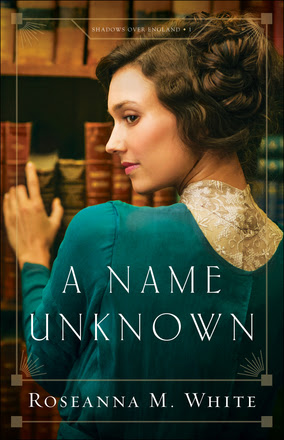 She's Out to Steal His Name. Will He Steal Her Heart Instead?

Rosemary Gresham has no family beyond the band of former urchins who helped her survive as a girl in the mean streets of London. Grown now, they are no longer pickpockets--instead they focus on high value items and have learned how to blend into upper-class society. Rosemary is beginning to question whether she can continue in this life when she's offered the challenge of a lifetime--determine whether a certain wealthy gentleman is loyal to Britain or to Germany. After all how does one steal a family's history, their very name?

As Europe moves ever closer to World War I, rumors swirl around Peter Holstein. Awkward and solitary, but with access to the king, many fear his influence. But Peter can't help his German last name and wants to prove his loyalty to the Crown--so he can go back to anonymously writing a series of popular adventure novels. When Rosemary arrives on his doorstep pretending to be a well-credentialed historian, Peter believes she's the right person to help him dig through his family's past.

When danger and suspicion continue to mount, both realize they're in a race against time to discover the truth--about Peter's past and about the undeniable attraction kindling between them.

Witty dialogue, intrigue, and stellar characters combine to make "A Name Unknown" a truly outstanding historical fiction novel! Rosemary and her ragtag family of former misfits trying to creatively eke out an existence in London just before World War I all make for a winning cast of characters, and Rosemary herself stole my heart from the first chapter. Despite her thieving ways, you just can't help but like her, and see the heart of gold that lies behind her actions. And the ever awkward Peter, with his mysterious family history and his empathy-inducing stutter, makes for quite the likeable and admirable guy. The manner in which he leads others towards a faith in God is beautiful to behold, and is something we should all strive towards! I love the natural way that the author weaves Rosemary's own faith journey into the story, providing moments that feel real and natural and are just tender to behold. Not only will readers be entertained by the mysterious elements of the story and the fun and interesting romance that sparks between Rosemary and Peter, but they will also be treated to some wonderful moments of faith as well.

I think my favourite part of this story was coming to the oh-so-satisfying conclusion and realizing that this is only the first book in what promises to be a solid series. I'm not sure how I'd missed the fact that this is book one in the Shadows over England series, but when I began the novel I had no idea I'd get to return for more in future books. Let's just hope the wait isn't too long, because I'm looking forward to what is in store for these intriguing characters.

Fans of historical fiction books should definitely add this book to their "must read" list this summer. They will certainly be glad they did! I award this story a very solid rating of 4.5 out of 5 stars.

Roseanna M. White pens her novels beneath her Betsy Ross flag, with her Jane Austen action figure watching over her. When not writing fiction, she's homeschooling her two children, editing and designing, and pretending her house will clean itself. Roseanna is the author of nine novels, ranging from biblical fiction to American-set romances to her new British series. Roseanna lives with her family in West Virginia. Learn more at www.RoseannaMWhite.com.