Fabulous! "Egypt's Sister: A Novel of Cleopatra" by Angela Hunt 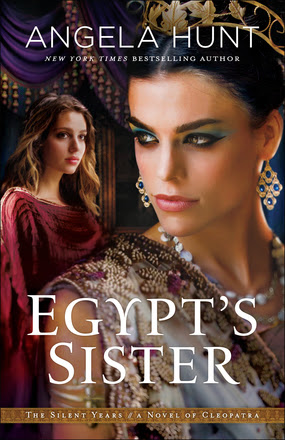 You Don't Know Her Name. The World Remembers Only Her Greatest Friend: Cleopatra.

Raised together in the Alexandrian palace, Chava, the Hebrew daughter of the royal tutor, and Urbi, an Egyptian princess, become as close as sisters--and rivals with their dreams of greatness. When Urbi unexpectedly ascends the throne as Queen Cleopatra, Chava believes their bond is strong enough to survive. But absolute power has a way of changing everything.

The ultimate betrayal rips Chava from everything she's ever known and sends her to the lowest rung of Roman society where she must choose between love and honor, between her own desires and God's will for her life, if she hopes to rise again.


With rich historical details and characters that are utterly fascinating, Angela Hunt's "Egypt's Sister" is a fabulous addition to the world of Biblical fiction. I haven't really read a book quite like this one, set in the "silent years" between the Old and New Testaments, and I quite enjoyed learning about the Jews who lived in the amazing city of Alexandria. I had no idea that a Jewish Temple was built in Egypt! I found myself longing to step through the pages of the this story and encounter the city where Cleopatra lived, to sail the seas to Rome, to observe the dramatic battles up close.

Hunt has created a truly memorable character in Chava in particular. Her life as Cleopatra's playmate until the moment that she experiences a truly horrible betrayal had me glued to the pages as I viewed history through her eyes. Her resiliency and her difficult relationship with God in the face of her extreme trials made for some memorable scenes. I am not sure that many of us could endure what Chava does and not only survive but thrive! But perhaps that just showcases the power of God to take what is meant for evil and to turn it to our good. "Egypt's Sister" may just be fiction, but it does an admirable job at reminding readers that God is good, and uses the most horrible of circumstances in unexpected ways.

Readers who enjoy books that truly bring history to life in ways they haven't encountered before should definitely grab a copy of Angela Hunt's latest novel. They will not only be entertained, but will gain a new appreciation for a number of historical characters that lived and breathed in the time before Jesus was born. I award this novel a solid rating of 4 out of 5 stars.