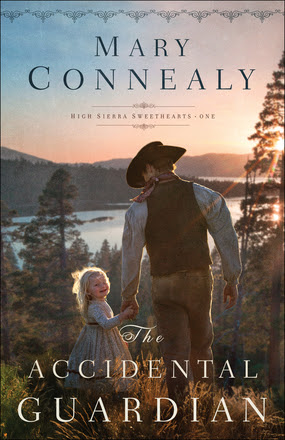 She's the Only Witness to a Wagon Train Attack. Keeping Her Safe, Though, Means His World Is about to be Turned Upside Down.

When Trace Riley finds the smoldering ruins of a small wagon train, he recognizes an attack by the same group who left him as sole survivor years ago. Living off the wilderness since then, he's finally carved out a home and started a herd--while serving as a self-appointed guardian of the trail. He'd hoped the days of driving off dangerous men were over, but the latest attack shows otherwise.

Deborah Harkness saved her younger sister and two toddlers during the attack, and now finds herself at the mercy of her rescuer. Trace becomes an accidental guardian when he offers the only shelter for miles around and agrees to take them in until they can safely continue their journey. His simple bachelor existence never anticipated kids and women in the picture and their arrival is unsettling--yet enticing.

Trace and Deborah find themselves drawing ever closer as they work together to bring justice to the trail and help the group survive the winter--but every day closer to spring means a day closer to leaving the mountains forever.


A delightful blend of action-packed scenes, likeable characters, and soul-warming moments combine to make "The Accidental Guardian" a great start to Mary Connealy's "High Sierra Sweethearts" series. I was hooked from the first chapter, and it was hard to step away from this novel even for a moment as I wanted to see how things would resolve for the survivors of the wagon train attack. I enjoyed the moments of humour that Connealy tucks into the plot, moments that feel entirely natural even in the midst of the pain and loss the characters are experiencing. Doesn't that just reflect real life where one moment you can be crying and the next fighting a smile? And I think what I most liked about the story is that Trace and Deborah are both characters who refuse to conform to what we would typically expect of people in their shoes, as both are survivors of hardship that have shaped them in utterly unique ways. Trace is one of those characters you can't help but like, as he's heroic but definitely not perfect, fighting the same sort of sins that brood in all of our hearts. Watching him grow over the course of the novel and really embrace God's calling on his life was just so enjoyable to watch. And though I may not swoon over the romantic bits of stories, the love that blooms in this story was not only authentic (and often fun!) but is sure to set the romance lovers hearts to racing. As already mentioned, this book is truly packed with adventure, and the scenes are lively and make the story fly by. All in all, for me this book just hit the mark and I quite enjoyed it!

Mary Connealy will no doubt bring smiles to the faces of her fans as they close the final pages of this book, and leave them eager to find out what's next in store for these wonderful characters. I award this novel a rating of 4.5 out of 5 stars, and can't wait for the second High Sierra Sweethearts novel!