Her fans will no doubt enjoy this one! "Together Forever" by Jody Hedlund 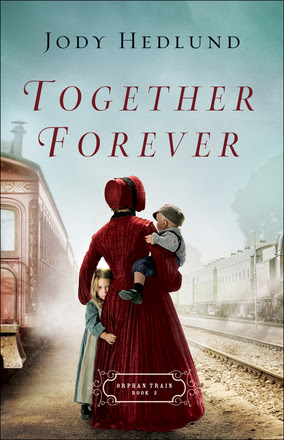 
Will the Mistakes of Their Past Cost Them a Chance at Love?


Determined to find her lost younger sister, Marianne Neumann takes a job as a placing agent with the Children's Aid Society in 1858 New York. She not only hopes to offer children a better life, but prays she'll be able to discover whether Sophie ended up leaving the city on an orphan train so they can finally be reunited.

Andrew Brady, her fellow agent on her first placing-out trip, is a former schoolteacher who has an easy way with the children, firm but tender and friendly. Underneath his charm and handsome looks, though, seems to linger a grief that won't go away--and a secret from his past that he keeps hidden.

As the two team up, placing orphans in the small railroad towns of Illinois, they find themselves growing ever closer . . . until a shocking tragedy threatens to upend all their work and change one of their lives forever.


Weaving together intriguing historical settings with dramatic plot elements, Jody Hedlund's second addition to the "Orphan Train" series will grab you from the first few pages and warm your heart while doing so. As someone who works with children myself, I really enjoyed the glimpse this story gives readers into the lives of the orphans who were placed with a variety of families in Illinois. Hedlund does an excellent job at capturing the emotions that these children would have faced, from fear to rejection to excitement in the case of those finding a good placement. I also enjoyed the way that Hedlund peers into the lives of both young orphans and also older teen orphans, showing the difficulty these older youths would have found leaving the streets they've grown up on to then be placed with a family in what must have seen a truly foreign setting in comparison. Likewise, I enjoyed glimpsing what it would have been like for the "placing agents" to have to connect and bond with these children and then say goodbye when they were placed with families that the agents really knew very little about.

I have to admit that I didn't always enjoy the romantic interactions between Marianne and Drew as they sometimes seemed over the top to me. However, the last third of the story really appealed to me, as their feelings for each other are put to the test and are refined as the events of the story unfold, displaying a love of the best kind, a love built on truth and loyalty and faith. As readers learn of the tragedy that these characters have experienced in their pasts, we come to appreciate each of them in a whole new way, rooting for blessings to fall on them after the hard times they've lived through. Hedlund has really succeeded at bringing the story to life, while throwing some moments into the story that I didn't see coming, a style of writing I always look forward to.

Fans of the first Orphan Train novel from Hedlund will no doubt enjoy this follow-up novel as well, as they again step back in time to the mid 1800's. I award this novel a solid rating of 4 out of 5 stars.

Jody Hedlund is the author of over a dozen novels, including Love Unexpected, Captured by Love, Unending Devotion, The Preacher's Bride, and A Noble Groom, winner of the 2014 Carol Award for historical romance. She received a bachelor's degree from Taylor University and a master's from the University of Wisconsin, both in social work. She lives in Michigan with her husband and five children. She loves hearing from readers on Facebook and on her blog at www.jodyhedlund.com.