Impossible to put down: "Called to Protect" by Lynette Eason 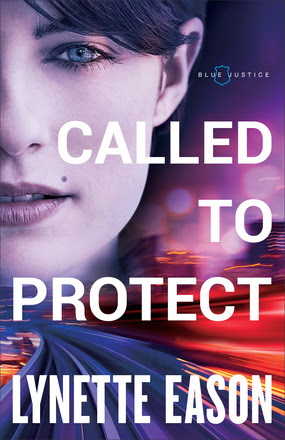 
She'll have to draw on all of her resources to crack the case--and guard her heart.

After being dumped by her fiancé, Chloe St. John has decided that the only male she likes is her K-9 German shepherd partner, Hank. But being over the whole romance thing has perks--like giving full attention to her job. Attention she's definitely going to need because a case of human trafficking with connections to her missing cousin just landed in her lap.

Deputy US Marshall Blake MacCallum is in a race against the clock to rescue his kidnapped daughter when Chloe and Hank are asked to be a part of the task force assembled to bring down the traffickers. Chloe finds herself attracted to the silent, suffering man. But can she trust him? And can Blake trust himself around this firecracker of a woman?

Buckle in. This fast and furious ride will have your heart pumping from the very start.

What a ride! From the get-go, "Called to Protect" will sweep you up into non-stop action and a harrowing tale of human trafficking that is absolutely riveting. As a father with daughters myself, I simply cannot imagine what it would be like to have your daughter kidnapped by traffickers and forced into a cage while awaiting a horrific fate. It's absolutely tragic to think that these sorts of things happen! As such, I found that this book preyed on my emotions even more than Eason's novels usually do, and I simply couldn't put the book down until I was able to see how everything resolved.

Eason continues to showcase her skills as an author of romantic suspense, because this second novel in the series is every bit as good as the first one! The cast of characters are well-fleshed out, and though Chloe and Blake may be the stars of the show, the secondary characters also add much to the tale (with perhaps the dog, Hank, stealing the show!) Chloe and Blake's relationship didn't always ring true for me, partly because I couldn't figure out Blake's age and marital status until farther into the story. I think if I'd known his backstory earlier, I would have been a bigger fan of the sparks that catch between them. But as the story progressed and I got to witness their sacrificial care for each other, I was sold! I am entirely certain that readers who are typically attracted to novels with romantic elements will find much to love here. And for those readers just looking for some excellent suspense, then they should look no further because this second novel in the Blue Justice series absolutely delivers!

Called To Protect is another thrilling novel from Lynette Eason's creative mind. I enjoyed every moment and give this book a solid rating of 4 out of 5 stars.