Perfect Bite-sized Bits of Murder: "The Cost of Betrayal" by Henderson, Pettrey, Eason 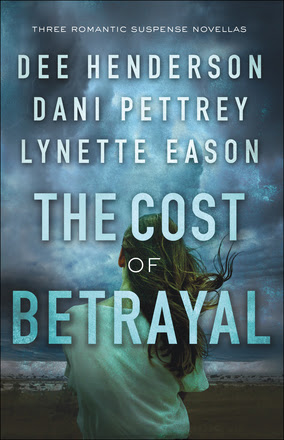 FAITH WILL BE TESTED. TRUST SHATTERED.

After serving six years of a twenty-year sentence for a murder she didn't commit, Janelle Roberts is finally freed. But the truth is still waiting to be discovered, and a murderer is still at large. Janelle needs to be somewhere safe with someone she can trust. She may not survive another act of treachery.

Tennyson Kent is trapped on the isolated island of her childhood by a storm surge, and she is shocked when the typically idyllic community turns into the hunting grounds of a murderer. Cut off from any help from the mainland, will she and first love Callen Frost be able to identify and stop a killer before they become the next victims?

When Detective Isaac Martinez lands in the ER with a gunshot wound, he pulls through thanks to trauma surgeon Ruthie St. John. But as the witness to a crime and possible corruption, Martinez is at risk from someone intent on silencing him--and those around him--forever. When he barely survives another attack while recovering, both he and Ruthie must flee, trying to outrun deadly killers while locating the evidence they need to end the danger.

Three of the most popular authors of romantic suspense once again join forces and offer up a set of novellas that are sure to get your heart racing! Sometimes you don't have time to get swept up into a long novel, and these stories satisfied my craving for some well-written suspense that fit into my busy schedule. Pettrey and Eason's novellas are infused with action of the best kind, with scenes that are lively and crackle with tension and danger. But Henderson's novella is addictive in a different way, delving into a cold case and offering up justice in an equally mesmerizing manner, even if there aren't the same sort scenes where the characters lives are in peril. I would be hard pressed to make a firm commitment about which novella I enjoyed better, because each features characters you will quickly grow to care about and find yourself rooting for. But if I had to choose, because I've been devouring every book of Eason's "Blue Justice" series, I really liked reading about another member of the St. John family, Ruthie, as she shows off that she's just as good with a gun as her siblings!

Henderson, Pettrey and Eason once again prove why they are so well known and loved for their contributions to the genre of Christian romantic suspense. They each excel at crafting novels that are completing absorbing and difficult to put down, and "The Cost of Betrayal" is another excellent collection that is sure to please their fans. And best of all, their writings always point toward our God of love and justice and grace, adding a whole other layer of depth to their stories. You would be hard pressed to put down this book and not be left in a thankful spirit for having a God who will set all things right, whether in this world or in the one to come!

If there are any other suspense fans out there, regardless of whether they've read these authors before or not, they should definitely grab a copy of this book for themselves. The authors have delivered the perfect bite-sized bits of murder to devour in those precious moments you can carve out of your day. I award this book a solid 4 out of 5 stars.

Dani Pettrey
Praised by New York Times best-selling author Dee Henderson as "a name to look for in romantic suspense," Dani Pettrey has sold more than 400,000 copies of her novels to readers eagerly awaiting the next release. Dani combines the page-turning adrenaline of a thriller with the chemistry and happy-ever-after of a romance. Her novels stand out for their "wicked pace, snappy dialogue, and likable characters" (Publishers Weekly), "gripping storyline[s]," (RT Book Reviews), and "sizzling undercurrent of romance" (USA Today).

Lynette Eason
Lynette Eason is the bestselling author of Oath of Honor, Called to Protect, and Code of Valor, as well as the Women of Justice, Deadly Reunions, Hidden Identity, and Elite Guardians series. She is the winner of three ACFW Carol Awards, the Selah Award, and the Inspirational Reader's Choice Award, among others. She is a graduate of the University of South Carolina and has a master's degree in education from Converse College. Eason lives in South Carolina with her husband and two children. Learn more at www.lynetteeason.com.

Dee Henderson
Dee Henderson is the author of numerous novels, including Taken, Undetected, Unspoken, Full Disclosure, and the acclaimed O'Malley and Uncommon Heroes series. Her books have won or been nominated for several prestigious industry awards, such as the RITA Award, the Christy Award, and the ECPA Gold Medallion. Dee is a lifelong resident of Illinois. Learn more at www.deehenderson.com.