Hits close to home: "Daughter of Cana" by Angela Hunt 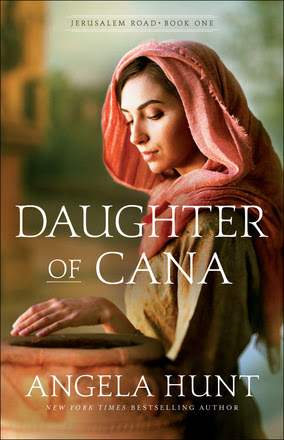 How Will Walking in Yeshua's Footsteps
Forever Change Her Life?


Thomas and Tasmin, twin siblings hired to oversee a wedding feast in Cana, worry when the host runs out of wine . . . until a guest tells Tasmin to have the servants fill the pitchers by the gate with water from the cistern. Reluctantly, she obeys--and is amazed when rainwater turns into the finest wine ever tasted in Cana.

When Thomas impulsively decides to follow the teacher from Nazareth, the twins argue bitterly. Tasmin refuses to be abandoned or to let her brother be taken in by a magician-prophet. When he departs anyway, she decides to follow the Nazarene's group, aided by Jude, younger brother to Yeshua of Nazareth, and do whatever she must to mend the fractured relationship, reveal the truth, and bring her brother home.


Fans of Biblical fiction, rejoice! Angela Hunt, with her finely honed ability to take events from the Bible and weave a fictional tale around them, has released another winning novel in "Daughter of Cana". I found myself absorbed from the get-go as I joined Hunt on her imagining of what it would be like to be the twin sister of Thomas, disciple of Jesus, as he gets called to join Jesus on his mission. Hunt has cleverly woven Tasmin's tale with that of Jesus' younger brother, Jude, as together these characters' lives are completely upended by the unexpected actions of Yeshua.

Hunt has perfectly captured the flavour of Galilee and Jerusalem from times past, from the wedding in Cana where Jesus turned water into wine, to the dusty roads leading ultimately to Jerusalem where Jesus lost his life and also conquered death once and for all. Her characters are complex and rich, and they gave me a fresh appreciation for the experiences that people around Jesus went through, both the good and the terrible. There were many times reading the "Daughter of Cana" that I found myself shifting uncomfortably as I watched the characters wrestle with who Jesus is and what that meant for their lives. In their moments of doubt and disbelief, their utter conviction that they alone believed what is right and that Yeshua must be wrong, I saw my own reflection staring back at me. How many times have the words of Jesus just contradicted everything that feels natural to us, in our sin? How many times have we wrestled with doubt and disbelief, even when the miraculous has stepped into our lives? Daughter of Cana not only will entertain you with a freshly told tale about Jesus, it will leave you examining your own beliefs and choices in life at the same time.

Angela Hunt has once again written a thought provoking novel that has brought history to life in a new way. I quite enjoyed this first offering of the Jerusalem Road series, and I am looking forward to what she has next in store for her fans. I award this novel a solid rating of 4 out of 5 stars.