Inspiring and sobering at the same time: "The Runaway Bride" by Jody Hedlund 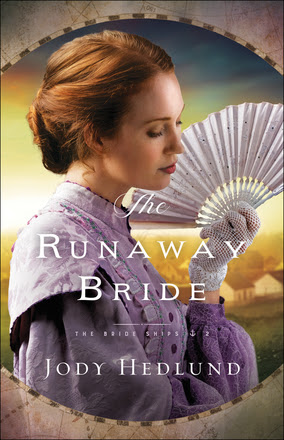 
Haunted by Mistakes in Her Past, Will She Ever Again

Trust Her Heart to Another?

Wealthy Arabella Lawrence flees to British Columbia on a bride ship, still bearing the scars of past mistakes. One of the few single women in the boomtown, she immediately attracts suitors, but she is determined not to find herself trapped again by making a poor choice.

Vying for her hand are two very different men. Lieutenant Richard Drummond is a gentleman in the Navy, held in high esteem. Peter Kelly is the town's baker who has worked hard to build a thriving business. He and Drummond not only compete for Arabella's affections, but also clash over their views of how the natives should be treated in the midst of a smallpox outbreak.

As Arabella begins to overcome her fears, she discovers someone in dire need--a starving girl left behind by her tribe. Intent on helping the child, Arabella leans on Peter's advice and guidance. Will she have the wisdom to make the right decision, or will seeking what's right cost both her and Peter everything?

The second novel in Jody Hedlund's "The Bride Ships" series entertains on many levels, bringing to life two fascinating characters in a way that I found both inspiring and sobering at the same time.

It is quite intriguing to read a novel that is entirely set on location in a city only a couple of hours away from where I live, a city I actually just visited a month ago - Victoria, B.C. But reading of how the First Nations people were mistreated and purposefully exposed to small pox, was sobering, especially considering that this is part of my own Nation's local history. At the same time, I found the character of Peter Kelly to be truly inspiring in how he stood up for justice and advocated for the First Nations people, and I found myself hoping that such characters truly existed so many years ago!

I can attest that Hedlund has wonderfully captured the feel of Vancouver Island, and once again succeeded at transporting her reader's back in time with a story that kept me on the edge of my  seat. Arabella's history is just tragic to read about, and watching her almost make a colossal mistake made me want to yell at all the character's through the pages! But watching Arabella grow over the course of the story and become so brave and courageous was wonderful to see. And I dare anyone to read this book and not be left with a smile on their faces.

I have a special fondness for this series in part because of the setting being so close to my home. But besides that fact, this is just a well crafted series, and "The Runaway Bride" is another solid addition to the series. I award this novel 4 out of 5 stars.