Far more epic in scope than I'd anticipated: My review of "Kiss of Night" by Debbie Viguie 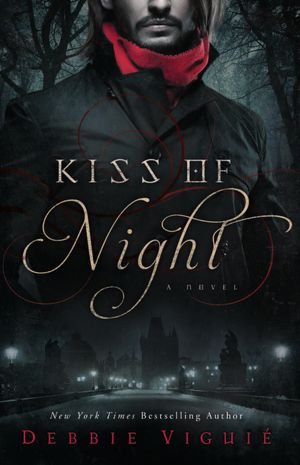 Centuries ago, Raphael was a blasphemous knight who fought in the Crusades purely for his own mercenary benefit, and to satisfy his taste for killing. Now, condemned for his evil passions and hypocrisy, he wanders the earth a vampire, cursed with first-hand knowledge of the supernatural world he once denied existed. The powerful relic he still possesses from his days as a Crusader has been stolen by a rival vampire who has recruited an army of soulless underlings to aid him in spreading evil. At the time he learns this, Raphael has been hunting this vampire for nearly a century, and it seems the final battle is destined to take place in Prague.

For help in this quest, Raphael must enlist the aid of two humans, David and Susan, who suddenly find themselves immersed in a world they never imagined, entangled with supernatural forces they can’t control. Susan, in particular, finds herself conflicted as she struggles with her inexplicable attraction to Raphael. In the end, both Susan and Raphael will be called upon to exercise courage and faith, and in the process, the question What would happen if a vampire truly accepted God? is answered.

Well, I'm not sure how I missed the release of this book last fall, but I'm sure glad I got my hands on it now!

I have never gotten swept up into the vampire book craze, and have never seen a single Twilight film, but I have to say that after reading Kiss of Night I wonder if I've been missing out! This book is certainly on the edgier side of Christian fiction with vampires lusting for blood and fights to the death between vampires and humans. But I have to say that I was absolutely captivated by the story line and the breakneck pace of the book, which largely takes place in the present but also has brief snapshots into Raphael's past. The book has a fascinating premise underlying it, posing the question of whether it would be possible to be a vampire and to also embrace a belief in God. The manner in which the author lays this out makes this an entirely plausible scenario, and also raises an intriguing concept about vampires being cursed because the human had been so wicked that there was no way that in a span of their lifetime they would have been able to be redeemed. Instead, they are cursed to become vampires and basically become immortal (except for a few ways that they can be killed), giving the vampire centuries to come to grips with their evil nature and realize their need for redemption. I loved watching Susan and David discover that vampires existed, and the forbidden love that unfolds between Susan and Raphael is sure to please those craving some romance in the midst of the suspense and the supernatural elements.

By the end of the book, I realized that I had entered a series that was far more epic in scope than I'd anticipated, with the unfolding of the beginning of a classic good versus evil battle unto the end. I came to the end wondering how I'm going to be able to wait for the second installment! The writing is action-packed, the characters are intriguing, and the plot is exciting and superbly crafted. In short, this is a great read, and worthy of 4.5 out of 5 stars.

Book has been provided courtesy of the publisher, Faithwords (Hachette Book Group) for the purposes of this unbiased review.

Debbie Viguié is the New York Times Bestselling author of over a dozen novels including the Wicked series and the new Crusade series co-authored with Nancy Holder.  Much of Debbie’s writing has a dark edge to it, including her retold fairy tales, her latest being Violet Eyes, a retelling of The Princess and the Pea.  In addition to her epic dark fantasy work Debbie also writes thrillers including The Psalm 23 Mysteries and the Kiss trilogy.  When Debbie isn’t busy writing she enjoys spending time with her husband, Scott, visiting theme parks.  They live in Florida with their cat, Shrödinger.