Powerfully written: My review of The Last Sacrifice by @HankHanegraaff and @SigmundBrouwer1 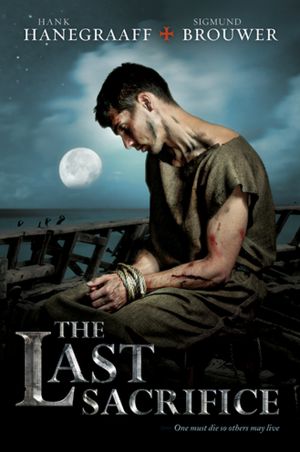 The Last Sacrifice sees the return of Gallus Sergius Vitas, who had been sentenced to death by Emperor Nero and his most trusted adviser, Helius. While Nero waits in the arena stadium to watch a man he believes to be Vitas die at the hands of a gladiator, little does he know that Vitas has already been spirited away out of Rome after having been tossed onto a ship along with the Apostle John. Along with his freedom, Vitas has been given a scroll written in Hebrew and filled with symbolism he has been told to unravel to find the answers he's seeking. The scroll contains portions of the letter of Revelation, a letter that Helius is also seeking to understand, for it portends the death of Emperor Nero, information Helius will seek to keep from Nero at any cost. When Helius realizes that Vitas is still alive, he sets into motion a plot to kill Vitas in order to protect the power that Nero has shared with him, a power that he and Nero are bent on using to wipe out every last Christian in the empire.

I greatly enjoyed this follow-up to the story begun in The Last Disciple. Hanegraaf and Brouwer make a dynamic writing team, and the scenes crackle with action and tension and suspense. The book is written at an unstoppable pace, making it difficult to step away from it for any length of time. I love being able to watch Vitas on his journey, from moments of hopelessness to growing ever nearer to choosing to follow the Christos whose name seems to follow him no matter where he is. Some of the scenes involving Nero are so realistically written that I felt utter revulsion at reading about an Emperor who was so entirely twisted and perverted, especially the scene where he has a boy castrated and then seeks to marry him. How bizarre that the Roman world embraced this as normal! The scenes set in Jerusalem are very powerful ones, and serve as a cautionary tale of how far off course it is possible for God's seemingly devoted followers to go. Men of power, such as the temple priests, were seen serving God with devotion and yet easily willing to kill anyone in their way, in order to defend their position of power. Likewise, the scenes set in Rome, where men and woman did as they pleased, satisfying any desires of the flesh without any regard for how it impacted others, made me contemplate how very similar our own culture is today.


The Last Sacrifice is a very worthy follow up to the first book in the series, and serves to advance the story of Vitas and his wife, as well as the story of the survivors in Jersulam, while leaving me craving the conclusion to this powerful series. I award this book 4.5 out of 5 stars. I'm certainly glad that the wait is almost over for book 3, The Last Temple, which I will be reviewing in August 2012.


Book has been provided by the publisher, Tyndale (courtesy of publicist Katie Dodillet), for the purposes of this unbiased review.

Hank Hanegraaff serves as president and chairman of the board of the North Carolina–based Christian Research Institute International. He is also host of the Bible Answer Man radio program, which is broadcast daily across the United States and Canada as well as around the world through the Internet at http://www.equip.org.

Widely considered to be one of the world's leading Christian apologists, Hanegraaff is deeply committed to equipping Christians to be so familiar with truth that when counterfeits loom on the horizon, they recognize them instantaneously.

Whether writing youth or adult fiction, Sigmund Brouwer is a best-selling author of more than 40 fast-paced novels. Some of his works encourage young reluctant readers into the world of books, and others provide adults with riveting tales. His youth series include Mars Diaries; Short Cuts Extreme Sports; Lightning on Ice; CyberQuest; The Winds of Light; Dr. Drabble: Genius Inventor; and The Accidental Detectives. His adult fiction titles include Out of the Shadows, Morning Star, Thunder Voice, Double Helix, and Blood Ties.


READY TO BUY? BOOK MAY BE PURCHASED FROM....