A good book to get you in the mood for Christmas: My review of "The Ghost of Christmas Present" by Scott Abbott and Amy Maude Swinton 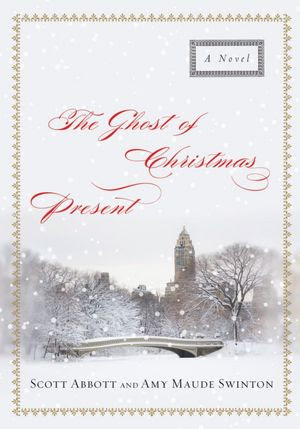 It’s the fourth Wednesday of November, and Patrick Guthrie is giving thanks. He’s giving thanks that his eight-year-old son, Braden, will finally have a procedure on his heart that will cure him of the same life-threatening condition that took Patrick’s wife several years earlier. But when Patrick suddenly loses his job teaching drama at a New York City high school, his already desperate financial situation becomes dire. Rebecca Brody, a social worker, shows up at his door with a judge’s order for him to appear before the city’s family court to determine if Patrick is financially fit, and Patrick realizes he is in danger of losing his son.

Patrick knows that he must somehow make it through the holiday season to a new job waiting for him in the new year. He also knows that Ted Cake, his former father-in-law, blames Patrick so much for the death of his daughter that he, a rich and disagreeable man, is the one pushing the city to call the custody hearing and give the boy over to him. Now Patrick has only three weeks before Christmas to somehow make enough money to pay his bills, present himself to the family court as a fit father, and keep Braden in his life.

It’s when Patrick sees a charming beggar on the subway dressed up as a crazy alien that he gets an idea. In true Dickensian holiday spirit, Patrick makes use of his old acting skills and his love of A Christmas Carol and takes to the streets in the guise of the Ghost of Christmas Present. Making a midtown corner his performing stage, he begins to touch and change the lives of all those who come his way, including Rebecca Brody and the bitter and heartbroken Ted Cake.


As a father myself, I have to say that I was completely drawn to this heart-stirring story about a father who will do anything necessary to be able to care for and provide for his child. The Ghost of Christmas Present is a well-written read with delightfully unique characters who are thoroughly entertaining and likable. Being a novella, the book is a quick read and I finished it in one sitting, and so I became easily absorbed into the story and into Patrick's struggles. I loved Patrick's passion for theater and enjoyed his unique perspective on life, drawing on his knowledge of Shakespeare to speak to the world around him. I was a little bothered that the front jacket of the book depicts Braden as age eight, and yet the first page refers to Patrick sharing a pop with his "ten-year-old son, Braden". Later in the story, it again switches to Braden being eight, then during the court scene he's suddenly ten. While this is really a minor detail, it is something that editors should catch in my opinion. Other than this, I was well pleased by the characterization, the swift dialogue, and the sense of suspense created in waiting to find out whether Patrick would be able to keep his son in his care.

Readers who are looking for a quick-moving, emotionally satisfying read to get them in the mood for Christmas should plan on picking up this book from talented authors Abbott and Swinton. I give it a solid recommendation and 4 out of 5 stars.

Book has been provided courtesy of the publisher, Howard Books, for the purposes of this unbiased review.

Scott Abbott attended New York University. His first script, My Father’s Keeper, earned him a place in the American Film Institute screenwriting program, as well as semi-finalist recognition in the prestigious Nicholl Fellowship Screenwriting Awards, the annual competition run by the Academy of Motion Picture Arts and Sciences.

Amy Maude Swinton is a native of New Mexico. She has a theater background and is a certified sommelier.