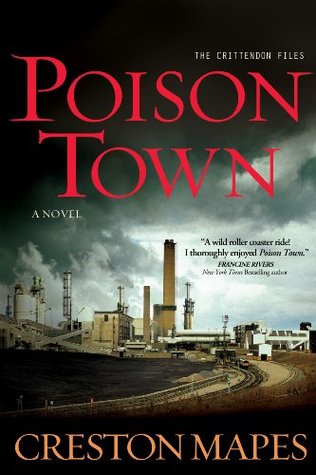 Check out a preview and my review of the latest book from Creston Mapes, courtesy of the publisher and CFBA:

Creston has fond memories of his boyhood in Bath, Ohio, where he became enchanted with his future wife, way back in the fourth grade. His father, Bernie, owned and operated The Weathervane Furniture Shop in town. The whole family lived right upstairs in the century-old house known as "The Shop."

Creston studied journalism at Bowling Green State University, then began his writing career. During the past 30 years, he has worked as a reporter, corporate copywriter, creative director, freelance writer, and author.

There's More Than One Kind of Poison in This Town

People are sick and dying. Rumors are swirling. Some claim chemicals leaking from a manufacturing plant are causing the cancer that's crippling people on the poor side of Trenton City, Ohio. Yet nothing at the plant appears amiss.

The problem remains a mystery until reporter Jack Crittendon's long-time mechanic falls ill and he investigates. Soon Jack becomes engulfed in a smokescreen of lies, setups, greed, and scandal.

The deeper he digs, the more toxic the corruption he uncovers. As he faces off with the big-time players behind the scenes and tries to beat the clock before more people die, he realizes the chillingly unthinkable--he knows too much.

If you'd like to read the first chapter of Poison Town, go HERE.

"Poison Town" sees the return of investigative reporter Jack Crittendon, as his family continues to piece their life together in the aftermath of the kidnapping of his wife, Pam. This second novel in the series is equally as fast-paced as the first, and filled with the same danger and intrigue that made the first book such an absorbing read. I loved the suspenseful plot that unpacks the corruption and and conspiracy of a large company that has placed profit above the well-being of the citizens it employs. But I most appreciated the stunning contrast between the poison spewed by the factory causing countless people to get sick, and the poison of Jack's unforgiving spirit which likewise slowly erodes his faith, marriage, and health. "Poison Town" will cause you to look deep into your own heart and see if you are wrestling with the temptation to hold onto bitterness towards anyone who has wronged you or a loved one. Not only was I thoroughly entertained by the the mystery unfolding in the pages, but I was left pondering the ways that lack of forgiveness can poison our soul.

Mapes has succeeded at writing a book that left me deep in thought while providing an action-filled adventure. I loved this second installment, finding it to be well-written, convicting, and permeated with truth -- all in all, a great read! 4.5 out of 5 stars.