Smashingly good murder mystery! My review of "Death by the Book" By Julianna Deering 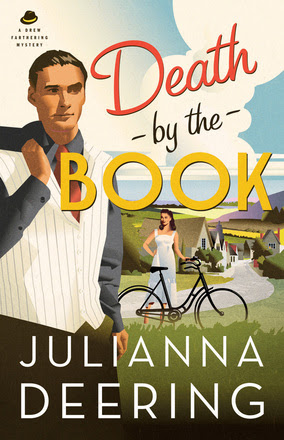 
WHEN THE VILLAGE OF FARTHERING ST. JOHN IS Stunned BY A SERIES OF MURDERS, DREW FARTHERING IS DRAWN again INTO THE SLEUTHING GAME.
Drew Farthering wanted nothing more than to end the summer of 1932 with the announcement of his engagement. Instead, he finds himself caught up in another mysterious case when the family solicitor is found murdered, an antique hatpin with a cryptic message, Advice to Jack, piercing his chest.
Evidence of secret meetings and a young girl's tearful confession point to the victim's double life, but what does the solicitor's murder have to do with the murder of a physician on the local golf course? Nothing, it would seem--except for another puzzling note, affixed with a similar-looking bloodied hatpin.
Soon the police make an arrest in connection with the murders, but Drew isn't at all certain they have the right suspect in custody. And why does his investigation seem to be drawing him closer and closer to home?

If I may dare say so, I loved "Death by the Book" even more than the first book in the series! Deering has written a smashingly good murder mystery, with witty and clever dialogue, and a plot that kept me guessing from beginning to end, I greatly enjoyed the continuation of the relationship between Drew Fathering and the lovely Madeline, making for many moments of hilarity and providing for a touching ending. The addition of Aunt Ruth to the mix had me laughing out loud as she blustered her way into the family, intent on protecting Madeline's virtue.
The characterization is wonderful, with a likable and original cast that makes for addictive reading. And, as the body count kept building, I must admit that I followed the author's rabbit trail to perfection, finding myself completely suspecting the wrong person! I do hope that Deering has another book in the works so I can try out my sleuthing once again and see if I can pinpoint the murderer with greater accuracy.

Although the book is thoroughly entertaining, what most sticks with me from this book is the moment where Drew chooses to grant forgiveness - and I dare not say more for spoiling the plot. But that scene and the resulting blessing that it leads to was a powerful one for me. I closed the book wondering how I myself would act in that situation. Drew really is an inspiring character!

If you are looking for a solid murder mystery set in a charming English village, then "Death by the Book" is just what you have been waiting for. 5 out of 5 stars.
Book has been provided courtesy of Baker Publishing Group and Graf-Martin Communications, Inc. Available at your favourite bookseller from Bethany House, a division of Baker Publishing Group.