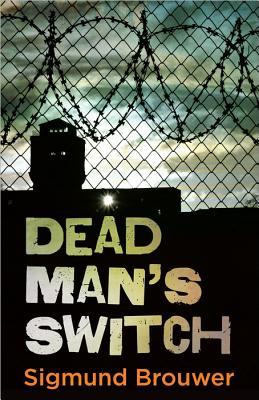 "Crazy and insane bad things are happening at night...

They will hunt you too."

Worse, the email threatens that King's father is involved in criminal activity on McNeil Island, where he works at a high-security prison. King embarks on a high-tech and high-stakes search to hunt answers he's afraid to learn. But when Kin becomes the hunted, he has to decide - whom can he trust?

Tautly-written with intense, action-packed scenes, "Dead Man's Switch" will grab you from the beginning pages and then hurtle you to the end! Brouwer does a fantastic job at building up the tension as the story progresses along, all viewed through the eyes of the intriguing youth William King. William is not your typical character, as he is living on a remote island with little contact with those living on the mainland. As such there is a certain mystique about him and his friends, and I liked the element of the unexpected that this gave not only to William but the other characters as well. I also enjoyed the way the author explores his relationship with his father, and the manner in which loving families are celebrated. While the story doesn't present a clear gospel message in and of itself, God can be clearly seen in the story, not only in the conversation William has with his dad, but also in the beauty of self-sacrifice and laying down your life for others. While written primarily for the young adult audience, I am certain that people of all ages will enjoy the interesting plot and the themes of power and betrayal, as well as considering what happens when we blur the lines between right and wrong. I strongly recommend this novel and award it 4 out of 5 stars.
Book has been provided courtesy of Harvest House Publishers for the purposes of this unbiased review.

Sigmund Brouwer is the popular author of more than 40 novels and numerous non-fiction books. He is coauthor of The Last Disciple series, which was featured in Time magazine and on ABC's Good Morning America. Sigmund inspires teens to read through speaking engagements at schools across North America and through his Coolreading.com programs. Sigmund is married to Christian recording artist Cindy Morgan, and they have two daughters.