Wonderfully entertaining: My review of "A Draw of Kings" by Patrick W. Carr 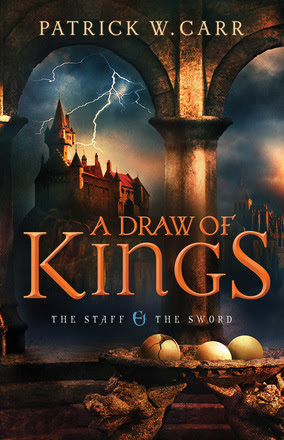 Dark Forces Have Gathered and the Final Battle for Illustra Has Begun
Their journey to Merakh should have made Errol and his companions heroes of the realm. Instead, they've been branded enemies of the kingdom.
In the wake of the king's death, Duke Weir is ruling the country--and he intends to marry Adora to bring an heir from the royal line. With Errol and the others imprisoned and the identity of the rightful heir to the throne still hidden in secrecy, Illustra is on the verge of civil war--and threatened by hostile forces gathering on every side.
A dangerous mission to free Errol is attempted, but the dangers facing the kingdom mount with every passing moment. The barrier has fallen, ferrals are swarming toward the land, and their enemies draw ever closer. Will the discovery of the true heir turn back the tide of Illustra's destruction?

Prepare to read long into the night when you open your copy of “A Draw of Kings”! Picking up where the second book in the series (the Hero’s Lot) left off, readers will be thrown back into the world of our hero, Errol, and the cast of characters who has joined him en route in this epic series. Errol is such a wonderful character and one I felt myself both connecting with and admiring for his sacrificial and humble ways. He is flawed like any man, yet provides a wonderful example of laying down his life for God’s greater purposes. The female characters are also worthy of admiration, and female readers will no doubt appreciation these strong and likeable females.

Patrick Carr again employs his excellent writing style, with non-stop action, vividly described scenes, and a wonderfully entertaining plot that had me racing through the pages. The battle and fighting scenes are intense and expertly written, leaving you feeling like you are standing right there experiencing it yourself! I continue to love the parallels between Christianity and the belief system employed in the books, finding myself re-examining my own faith and relationship with the triune God as I was reading along.

The Staff and the Sword series has proven to be a remarkable contribution to the arena of Christian fantasy fiction, and “A Draw of Kings” is a fine conclusion to the series. 4.5 out of 5 stars.