High-octane suspense: My review of "Distortion" by Terri Blackstock 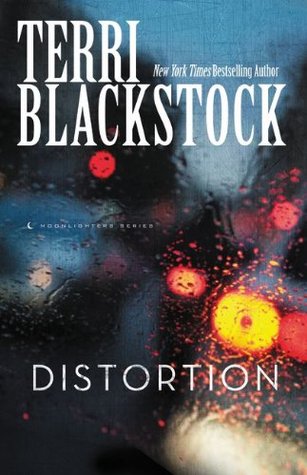 One ordinary day while helping her sister move, Juliet witnesses a man gunned down in a dark parking lot. That man is Bob, her husband of 15 years, and though at first she believes it is a random shooting, she quickly discovers that the attack was no random event but a planned attack on her husband. Juliet soon finds her own life threatened, and she fears for the safety of her children as well. Juliet and her sisters team up with PI Michael Hogan to discover the truth of just who exactly Bob was. Every clue she unearths reveals another layer of deception until Juliet doesn't even know what's real anymore - except that she'll do anything to keep her family safe.

Action-packed and featuring Blackstock's signature suspense, "Distortion" is a thrilling read from beginning to end. Readers who enjoyed the first novel in the Moonlight Series, entitled "Truth Stained Lies", will quickly become reaquainted with the characters they grew to care about in the first book, including the sisters Cathy, Juliet, and Holly. Blackstock does an admirable job at getting into her character's heads and minds, and as such I found myself grieving alongside Juliet and her children as not only do they have to deal with the loss of their husband and father, but they also have to choose to face a web of deceit that unfolds one layer at a time. By the time you put down this book, you may be looking at your own spouse askance and wondering if there are any secrets they are hiding from you! As with Blackstock's other books, I love that she makes no hesitation in celebrating faith with a clear, accessible gospel message, even in the midst of hypocrisy. Deep themes of betrayal are woven into the story alongside of the power of forgiveness, confession, and accepting the consequences of ones actions. As such, not only will "Distortion" provide you with an entertaining read, but you will find yourself taking a look at your own faith and wondering if you would be able to respond to the hard-ache with the strength that these characters do.

I will leave you with one warning - while much is resolved in this second story, you are left hanging wondering if ultimate justice will be visited upon the family. Like me, you will be eagerly waiting for the next installment! 4.5 out of 5 stars.

Terri Blackstock is a New York Times best-seller, with over six million copies sold worldwide. She is the winner of two Carol Awards, a Christian Retailers Choice Award, and a Romantic Times Book Reviews Career Achievement Award, among others. She has had over twenty-five years of success as a novelist.
Terri spent the first twelve years of her life traveling in a U.S. Air Force family. She lived in nine states and attended the first four years of school in The Netherlands. Because she was a perpetual “new kid,” her imagination became her closest friend. That, she believes, was the biggest factor in her becoming a novelist. She sold her first novel at the age of twenty-five, and has had a successful career ever since.
Recent books include Truth Stained Lies (Book 1 of her Moonlighters Series), and her acclaimed Intervention Series (Intervention, Vicious Cycle, and Downfall). Other recent favorites include Predator, Double Minds, the Restoration Series, the Newpointe 911 Series, the Cape Refuge Series, and the SunCoast Chronicles series.