A historically fascinating read! "Daisies are Forever" by Liz Tolsma

Near the end of Wold Ward II, Gisela Cramer flees from the advancing Soviet Army, along with her two nieces and other refugees she picks up along the way. In the midst of winter, they head to Berlin, fighting for their lives each step of the way as they battle cold and ice below and bullets and bombs from the sky. En route to Berlin, Gisela meets Mitch, a British prisoner of war who has escaped and is on the run. As they face one trial after another, they must learn that true hope lies beyond what they can see.

"Daisies are Forever" is a harrowing read, one that brings the trials of World War II to vivid life. As Gisela, her nieces, and flood of refugees fled before the Soviet army, I found myself gripping the pages and hoping they would stay safe! Tolsma has done a wonderful job at creating a heroine that you can believe in, one who faces danger head on and clings to hope in the darkest of nights. I enjoyed how the author has woven faith into the story and demonstrated God's hand of provision. Gisela and Mitch's story is well written, and I enjoyed many of their encounters. When I learned that her race to Berlin and her encounters in that city are based on true stories, that made me appreciate the story and their experiences all the more. However, I will say that I greatly enjoyed the first half of the story, and only tolerated the second half. I did not like the scheming of some of the other characters (i.e. Kurt), who are determined to break up Gisela and Mitch's growing affection for each other. I simply found this aspect of the story to be rather juvenile and to take away from the amazing journey Gisela is living out. I couldn't imagine that characters facing bombs and starvation and certain death would act in the manner depicted. Thus I found myself riveted by some parts of the story and annoyed by others. I did find the historical context of the story to be highly intriguing however, and that in and of itself made this a worthy read.

I encourage you to pick up a copy of "Daisies are Forever" and experience World War II in a way you may never have done before. Though much of the story I highly recommend and would give a rating of 5 out of 5 stars, the inclusion of the aspects mentioned above lower my rating to 3.5 out of 5 stars. 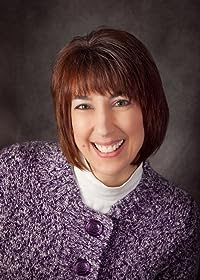 Liz Tolsma has lived in Wisconsin most of her life, and she now resides next to a farm field with her husband, their son, and their two daughters. Add a dog and a cat to that mix and there's always something going on at their house. She's spent time teaching second grade, writing advertising for a real estate company, and working as a church secretary, but she always dreamed of becoming an author. When not busy putting words to paper, she enjoys reading, walking, working in her large perennial garden, kayaking, and camping with her family. She'd love to have you visit her at www.liztolsma.com or at www.liztolsma.blogspot.com.
Email Post
Labels: Daisies are Forever Liz Tolsma