Nancy Rue and Rebecca St. James return for another joint effort with "Sarah's Choice", a novel that follows the emotional journey of a woman who is caught in a situation where every option seems to be an impossible choice.  Sarah has turned her back on God after the loss of her father, yet at the same times blames him for abandoning her. After taking on the financial burden of paying off the debts he left behind so that her mother is not crushed under the bills, Sarah is focused on getting a promotion that will help her start living again. She is convinced that the pay increase, followed by a new car and apartment, will turn her bleak life around. When she finds out she's pregnant, she doesn't believe she can count on her boyfriend to stand by her as he's never shown himself to be responsible but is always chasing one scheme after another. As all the people in her life try to make her choose the path they feel is best for her, Sarah must discover what she believes, and find the courage to make the right choice.

As with their prior collaboration (The Merciful Scar), I greatly enjoyed this latest book from these talented authors. While the book is primarily aimed at women, I think that anyone would enjoy delving into this story, and discovering the plans God has for our lives. The issue of abortion is a difficult one indeed, both for women and for men who are also impacted by the decision to end the life of a child. The authors have done a fantastic job at looking at the issue from many different angles, exploring the many reasons abortion is considered, and the terrible emotional fallout arising from such decisions. I also like the mysterious supernatural element to the story where Sarah is given visions of the possible future should she choose to keep the baby or abort. Other deep themes like forgiveness and reconciliation are also explored, along with the role of men as fathers and the need for men to man up and take responsibility for their choices as well. The words flow smoothly, and I found my emotions to be deeply engaged as I read through the story. The characters are realistic and ones I easily connected with, and I found myself wishing I could meet them again in future novels!

Poignant, moving, and ultimately hopeful, "Sarah's Choice" is a wonderful book. 4.5 out of 5 stars.

Nancy Rue is the author of over 100 books for adults and teens, including the Christy Award-winning The Reluctant Prophet, Unexpected Dismounts and Healing Waters (with Steve Arterburn), which was the 2009 Women of Faith Novel of the Year. She travels extensively—at times on the back of a Harley—speaking to and teaching groups of women of all ages. Nancy lives on a lake in Tennessee with her Harley-ridin’ husband, Jim, and their two yellow Labs (without whom writing would be difficult). 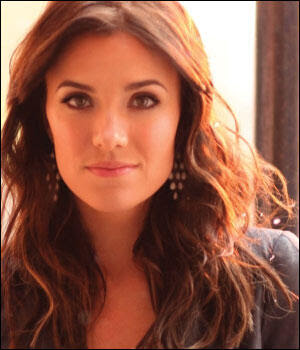 Rebecca St. James, an Australian-born Christian recording artist, is both a Grammy Award winner and a multiple Dove Award recipient. She is also the bestselling author of Wait for Me, SHE Teen, and What is He Thinking. In addition, St. James has appeared in the film Sarah's Choice and lent her voice to VeggieTales' An Easter Story. www.rsjames.com


Find out more about the book on the publisher website: http://www.thomasnelson.com/sarah-s-choice.html