"Life Behind the Wall" by Robert Elmer

Just in time for the 55th Anniversary of the creation of the Berlin Wall, 3 of Robert Elmer's novels have been bundled together and republished as "Life Behind The Wall". The compilation includes Candy Bombers, Hidden Bunker, and Smuggler's Treasure, and all three feature teenagers who are living in Berlin. The stories follow three generations, beginning with teen cousins Erich and Katarina in 1948, who are struggling to survive in the aftermath of war as the Soviet army blockades the east side of the city. Beetle Bunker then moves to the story of Sabine, who is Erich's much younger half-sister who discovers an underground bunker that she soon realizes can take her family under the wall to West Berlin. Finally, in Smuggler's Treasure readers will meet Erich's niece, Liesl, who enjoys the safety of West Berlin until she stumbles onto a secret that changes everything.

I quite enjoyed these three story that take place in a fascinating era that I haven't read about in children's fiction before. Each of the stories feature characters that readers will definitely relate to, and while I found some of the writing to be a bit choppy, overall I found them to be well-written. There is much excitement and intrigue to keep readers hooked from beginning to end, and I love that you don't have to wait for the next book in the series to keep reading the next installment! It can be a challenge to depict the horrors of war in a way that is appropriate to children, while still entertaining and educating them about a time where people lived in fear and yet also lived out inspiring lives as well. Yet Robert Elmer has done an excellent job at writing a series that is accessible to all and that can be enjoyed as good books while stirring conversation about actual historical events at the same time. I love that the characters wrestle with issues of forgiveness and what true courage and bravery looks like. These are things we will all deal with at different points in our lives. While the books are aimed at teens, I believe adults would enjoy these stories just as much.

Parents and teens looking for clean, suspenseful and entertaining stories should pick up a copy of "Life Behind the Wall". I strongly recommend this compilation and award it 4 out of 5 stars. 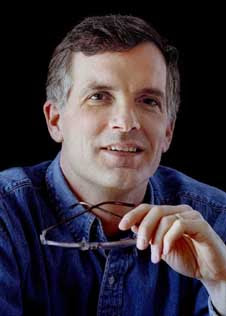 Robert Elmer is a former reporter and ad copywriter who writes from his home in the Pacific Northwest. He is the author of over fifty books, including nine contemporary novels for the adult Christian audience, two nonfiction titles, and seven series for younger readers. He's also a contributor to kids' versions of the popular "Case for..." books co-authored with Lee Strobel. Among kids, he is best known for his "Young Underground" and "Adventures Down Under" books. When he's not at the keyboard, he enjoys sailing and hiking with his wife, and spending time with their three kids--plus a growing number of little grandchildren.

Be sure to visit his web page at www.RobertElmerBooks.com.
Email Post