Quite a ride! "Persecuted" by Robin Parrish 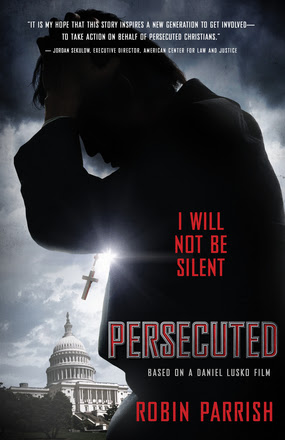 "The framers of our Constitution meant we were to have freedom of religion, not freedom from religion." --Reverend Billy Graham

The Question Is Not If Attempts Will Be Made
to Limit Religious Freedoms, But When.

And When That Day Comes, Will You Stay Silent?

A storm is coming.

The most popular evangelist of his day, John Luther, simply wants to share the Gospel and enjoy a quiet life with his family. He never asked to be at the center of a political controversy, but an ill wind has been blowing through the halls of Congress, and supporters of a new religious-equality bill see Luther's endorsement as critical.
But when Luther refuses to lend his support, he unknowingly sets in motion an explosive plan bent on destroying his reputation and undermining everything for which he stands. His once-normal life is turned upside down as he becomes a fugitive left with only one dangerous option--putting everything he holds most dear at risk while he fights to expose the truth. It is a mission that brings him face-to-face with the coming storm of persecution that could threaten the very fabric of our nation's freedoms.

"Persecuted" is quite a ride, filled with non-stop action from beginning to end, and based on a premise that is sobering to consider. What would the future be like if religious freedom were legislated away? I greatly enjoyed the character of John Luther, a man I couldn't help but admire with his sordid past and his remarkable change that can only be explained by the grace of Christ. I am confident that many readers will be able to identify with Luther's pre-Christ decisions, with his wandering heart and selfish desire to chase after drugs or alcohol or money or women. We may not all struggle with such overt sin, but we all spend time worshiping at alters other than the Lord's! The thought of a "Faith and Fairness" act that tries to legislate unity among religions seems almost bizarre to consider, yet I know that many would read this book and think that such an act would indeed be something worth celebrating! This book is an excellent reminder that persecution takes place every day, both in North America, and especially around the world, and that we need to be spiritually on our guard. I did find a few of the plot elements were difficult to swallow (I hesitate to say more for fear of spoiling to plot), but this didn't really detract from my enjoyment of the book. Rather, I found myself entertained from start to finish, and found the authors did a good job at balancing the scenes taking place in present time, where John was racing for his life, with those scenes from his past which provide such a powerful contrast for illustrating God's power and love for us all.

I award this book a rating of 4 out of 5 stars, and believe that both male and female readers will enjoy this solid read, one that will leave them deep in thought about whether we are willing to stand up for Christ, no matter the cost.
Book has been provided courtesy of Baker Publishing Group and Graf-Martin Communications, Inc. Available at your favourite bookseller from Bethany House, a division of Baker Publishing Group.