Dee fans, don't shoot me! My review of "Full Disclosure" by Dee Henderson

Ann Silver is a cop's cop. As the Midwest Homicide Investigator, she is called in to help local law enforcement on the worst of cases, looking for answers to murder. Hers is one of the region's most trusted investigative positions.

Paul Falcon is the FBI's top murder cop in the Midwest. If the victim carried a federal badge or had a security clearance, odds are good Paul and his team see the case file or work the murder.

Their lives intersect when Ann arrives to pass a case off her desk and onto his. A car wreck and a suspicious death offer a lead on a hired shooter he is tracking. Paul isn't expecting to meet someone, the kind that goes on the personal side of the ledger, but Ann Silver has his attention.

The better he gets to know her, the more Paul realizes her job barely scratches the surface of who she is. She knows spies and soldiers and U.S. Marshals, and has written books about them. She is friends with the former vice president. People with good reason to be cautious about who they let into their lives deeply trust her. Paul wonders just what secrets Ann is keeping, until she shows him the John Doe Killer case file, and he starts to realize just who this lady he is falling in love with really is....

Dee Henderson excels at creating characters with emotional depth and individuality that soon makes them feel like they are living and breathing. "Full Disclosure" sees her at her finest in creating fascinating characters, from Ann who has so much to admire and yet who is hiding complex secrets in her past, to Paul Falcon, who fights for justice but also seeks to put his faith and family first. The plot is an intricate one, with twists that I didn't see coming, and with lots of action-packed drama to keep things moving along. As you can see, there is a lot to like about this book.

However, I felt the book was a bit lacking on the suspense side for something characterized as "romantic suspense", because there were no real life and death situations where I feared for the character's lives. All such scenes really seemed to sit in past, historical moments, where we learned of what happened through being told about it rather than watching the characters live through it. If this book were characterized more as a contemporary drama I think I would be giving it a higher rating. Just because a book features FBI and cops who deal with murder doesn't make it suspenseful. The only thing I really disliked about the book, though, was that she made the character, Ann, the "author" of Dee's prior books like the O'Malley series. It seemed a little odd and self-serving to have characters in this story praising these books as "good solid reads" when they are actually talking about books Dee has written, not Ann in the story. I'm still not quite clear on why this aspect was added into the plot.

Don't get me wrong. Full Disclosure is overall a fairly good story, just a little different than I was expecting based on past works by Dee. Fans of Dee may be disappointed with this review, but I mildly recommend it and award it 3.5 out of 5 stars. Dee Henderson is the bestselling, award-winning author of 15 previous novels, including the acclaimed O'MALLEY series and UNCOMMON HEROES series. She is a lifelong resident of Illinois. Learn more at www.deehenderson.com. 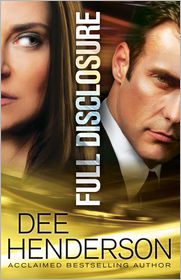