Gun-totin' Amish folk - Who knew? My review of "The Face of Heaven" by Murray Pura


Following on the heels of The Wings of Morning, the first book in Murray Pura’s Snapshots in History series, comes this compelling saga of the Civil War.


In April 1861, Lyndel Keim discovers two runaway slaves in her family’s barn. When the men are captured and returned to their plantation, Lyndel and her young Amish beau, Nathaniel King, find themselves at odds with their pacifist Amish colony

Nathaniel enlists in what will become the famous Iron Brigade of the Union Army. Lyndel enters the fray as a Brigade nurse on the battlefield, sticking close to Nathaniel as they both witness the horrors of war—including the battles at Chancellorsville, Fredericksburg, and Antietam. Despite the pair’s heroic sacrifices, the Amish only see that Lyndel and Nathaniel have become part of the war effort, and both are banished.

And a severe battle wound at Gettysburg threatens Nathaniel’s life. Lyndel must call upon her faith in God to endure the savage conflict and to face its painful aftermath, not knowing if Nathaniel is alive or dead. Will the momentous battle change her life forever, just as it will change the course of the war and the history of her country?

Murray Pura has penned a poignant read in The Face of Heaven, grabbing my attention from the first couple of chapters and holding me captive until the stirring conclusion. As with his prior book I reviewed, The Wings of Morning, I greatly enjoyed his take on the Amish community, and found it highly interesting to watch them grapple with how their community should respond to the injustice of slavery and their response to the civil war. My favourite line is when Nathaniel questions their stance not to participate in the war, when he says "Or does he want us to do something about it? Does God come in a mist and plant our corn for us? Harvest our wheat while we watch? Hitch our horses to our wagons and plows and carriages? So why do we think he will stop evil without our hands and feet and hearts?" Such a question makes me stop and think for sure, and there were many moments during the book that made me pause in introspection (and, I admit, even a scene where tears welled in my eyes!).

Nathaniel and Lyndel are wonderful characters, richly drawn and full of feeling and realism. The author has succeeded at truly bringing them to life and causing you to care about them and their story, which has been wonderfully placed in a vivid historical setting that all together makes for a compelling tale. I highly recommend this book for readers who enjoy historical fiction and Amish stories, and award it 4.5 out of 5 stars.

Book has been provided courtesy of the publisher, Harvest House, for the purposes of this unbiased review.

Murray Pura earned his Master of Divinity degree from Acadia University in Wolfville, Nova Scotia, and his ThM degree in theology and interdisciplinary studies from Regent College in Vancouver, British Columbia. For more than 25 years, in addition to his writing, he has pastored churches in Nova Scotia, British Columbia, and Alberta. Murray’s writings have been shortlisted for the Dartmouth Book Award, the John Spencer Hill Literary Award, the Paraclete Fiction Award, and Toronto's Kobzar Literary Award. His novels for Harvest House include Face of Heaven and The Wings of Morning. Murray pastors and writes in southern Alberta near the Rocky Mountains. He and his wife, Linda, have a son and a daughter. 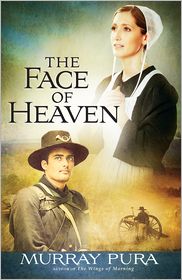