A fascinating novel: My review of "Congo Dawn" by Jeanette Windle 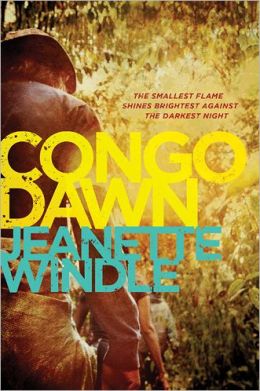 Determined to earn enough money to pay for her niece’s desperately required surgery, Robin Duncan signs on with a private company who is headed into the heart of the Congo to secure a mining site. Robin is a former Marine lieutenant, used to dangerous situations and unknown territory. However, soon after arriving in Africa, she is reconnected with a former Marine she served with, Michael, a man she had been determined to keep hating due to Robin’s belief that he abandoned her. However, as they sift through the truth of their own past relationship, they also realize that the situation at the mine is not as it seems. Robin and her team are focused on finding an insurgent who is causing devastation to the mine and who planted a bomb that resulted in death and injury. But Robin soon realizes that the truth may be far different than she believed as evidence of a conspiracy emerges. Robin’s very life becomes threatened as she must choose who to side with in a fight for survival.

Congo Dawn is a fascinating novel, steeped in rich detail about the history of the Congolese people, filled with the drama of war and an oppressed people, all joined together by an overarching story of suspense and conspiracy. The story is sure to entertain readers who enjoy suspenseful novels set in foreign locales, and stars likable characters readers will soon grow to care about. Robin Duncan is a unique character with her military background, her determination to win her father’s approval, her heart-break over thinking that a person she grew to love had abandoned her. I loved watching her growth over the course of the story, especially the beautiful faith that develops within her. Usually fiction novels don’t leave me in deep thought, but this one did as the author probes questions about suffering and God’s response to it, questions set against a backdrop of the Congolese who have experienced war and abuse and rape and trial after trial. And yet the story also allowed me to reflect on the wonderful gift of hope that Jesus offers to us, hope even in the midst of such suffering. I admire that Robin’s journey of faith is not forced into being part of the story, but naturally fits into the plot and rich setting and the characters who are breathing with life in the pages of the story.

Jeanette Windle continues to impress me with the unique stories that she creates, and Congo Dawn is another winner. It is well-written, with a plot that kept me hooked and with characters I wish I could meet in real life.

I strongly recommend this novel and award it 4.5 out of 5 stars.

Book has been provided courtesy of the publisher, Tyndale House, for the purposes of this unbiased review.

As the child of missionary parents, award-winning author and journalist Jeanette Windle grew up in the rural villages, jungles, and mountains of Colombia, now guerrilla hot zones. Her detailed research and writing is so realistic that it has prompted government agencies to question her to determine if she has received classified information. Currently based in Lancaster, Pennsylvania, Jeanette has lived in six countries and traveled in more than twenty. She has more than a dozen books in print, including Betrayed, Veiled Freedom and Freedom's Stand, as well as, the political/suspense best seller CrossFire.